Last weekend I was very lucky to escape the demands of an over heated toddler and have some time to myself at the Home of Holistics in Agia Napa. I’ve always loved any kind of spa treatment I could treat myself to and was very excited to see in a local magazine that they have just opened a new Fish Spa. It’s something I’d only recently heard of via updates on Facebook from friends in the UK who had tried it and Home of Holistics are the only place in Eastern Cyprus which now offer the treatment.

My husband was highly amused when I told him what I was going to do as I don’t like people touching my feet, I disagreed – well, for a start I don’t mind people touching my feet as such just not tickling them…. and they are fish not people! I had been intrigued by the idea of it for a while now and even put it on my list of 101 things to do in 1001 days!

For those of you who don’t know this treatment first originated in Turkey and is practised all over the Far East. It uses Garra rufa fish which exfoliate and massage your feet. They gently nibble away dead skin cells and can also stimulate acupuncture points, which is relaxing and improves circulation. 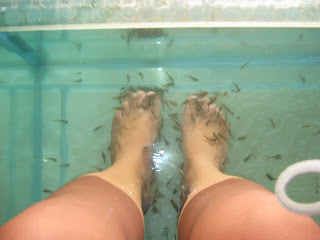 It was a bit ticklish at first but after a minute or so felt just like I had my feet in a jacuzzi with very tiny jets! I was very reassured to be told that the fish have no teeth and will not bite only nibble away at the dead and dry skin! It was absolutely fascinating to watch and that was relaxing in itself. After the treatment I could see a noticeable difference in the smoothness of my feet (which do suffer due to living in flip flops for several months at a time!)

I was very impressed with the salon and the procedures they use to ensure both the hygiene to the clients and the well-being of the fish.  I’d certainly go back again although with indecision as I picked up a leaflet on the way out and noticed all the other lovely treatments to choose from and it would take me a while to pick which one I wanted!