I is for Ink

If you had asked me a few years ago to come up with one of the most unlikely things I’d choose to do it would be to get a tattoo.  I’ve never liked them and although I probably shouldn’t admit it often classed people who had them as ‘chavvy’ or just instantly prejudged a person on the fact they had them.

Aaron had always wanted a tattoo and despite all my protests gradually got a few over the years.  I gave up offering my opinion and started to not really care, after all it’s his body and there’s no way I could stop him.   I never saw the point of them, I’d also never seen a tattoo that I thought looked good even as a piece of art, and what if you changed your mind?  I’ve spent weeks debating over buying clothes that I’ve gone off in less time – how would a permanent bit of ink be a good idea!

Then sometime after moving to Cyprus and  the sun melting my brain making a very good friend (who happened to have several tattoos and have a partner who is a tattoo artist)  I *might* have gone and got this done…. 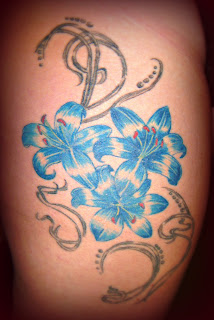 It took me almost a year from first thinking I might get one to the day I went to get it done so it wasn’t a spur of the moment idea. The idea for the design came from Aaron, with the flowers to represent me, him and Leo and the swirly bits are actually Leo’s date of birth and then we handed it over to Marc to draw it up.

It’s on the top of my leg and for a first tattoo it’s huge but I’m glad they all talked me into having it the size I did. One of the main reasons I was happy to get it done is that I trust Marc to do an amazing job, and everyone told me he is very gentle and that it wouldn’t hurt… well it did hurt but then again I am a wimp!

Problem now is that I’m going to have to have another at some point after getting one ‘for’ Leo or there might be a few questions later from baby No.2. 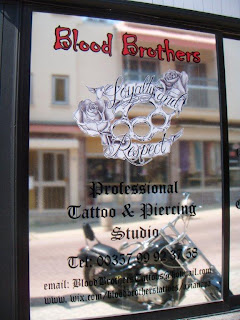 Marc is a brilliant artist and baby or not, I think I actually wouldn’t ever have another one if he wasn’t doing it for me! This year he’s opened up his own tattoo house with his business partner Paul and I’m sure they will do brilliantly.

This is not a sponsored post in any way – I just love my tattoo and also want to wish Marc and Paul all the best in their new venture.