We live on the east coast of Cyprus, in Derynia almost on the Green line which divides the Republic of Cyprus (South) from the Turkish Republic of Northern Cyprus. I don’t wish to enter into the politics of the island, the invasion in 1974 is still very recent to most Cypriots and I don’t know enough about it to be able to get involved in any kind of debate. (You can read more about it here, should you wish to know more)

Our apartment overlooks Varosha, the ‘Ghost town’ of Cyprus,

I’ve had many a walk with the my little man in the buggy around the village since arriving here,
Here are some photos from my springtime walks – note the lovely greenery, long gone now with the arrival of the hot summer. 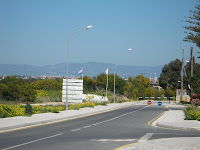 One of the UN checkpoints, as far as you can go in Derynia. 75% of the village is in the buffer zone. 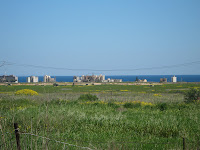 Looking into the buffer zone, note the barbed wire. 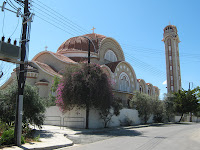 All Saints Church, built in 1992, work was started in January 1974 but stopped due to the invasion.

I am so glad we chose to live where we have, many property companies we contacted for infomation on tried to push us towards Paphos but Derynia suits us down to the ground.

This was originally posted on my blog A matter if choice (see the About page) but I have reproduced it here as an introduction to our life and home.