Playing in the park

Just over the road from us is a large park,  for Cyprus it is a very good park although I was quite surprised to see it described on one website as a ‘theme park’!

It has a small playground, and what is described on the website as a ‘Birds Exhibition’  – although it’s more of a cage which is far too small for the birds inside. There are also several displays of traditional water pumping devices.  It’s a shame that there is no information on them (not even in Greek) as they look quite interesting but I have no idea how most would work.
` 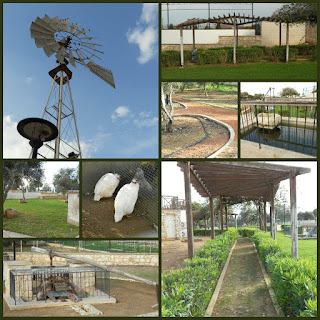 There are many twisty paths and different little areas to explore and Leo loves running around there. Although the playground isn’t huge there is a climbing thing with a slide which Leo declared was a fire station and them spent a long time asking me where there was ‘truffle’ (trouble) and who needed rescuing so he could ‘whoosh’ down the slide to the rescue.
We last went a couple of weeks ago, just before the boys were ill. It’s a good time of year as it’s far too hot to go in the summer, then you need to be near water!   At the moment there are big piles of leaves which Leo enjoyed kicking and playing with and treasure to be found.
Leo calls this park the ‘Park with the statue’ due to the War Memorial we pass on the way in. It has a slope running down behind it which is the easiest way in if you are pushing a buggy or the most fun way in if you are three years old!
For more photos of the park, see my Discovering Cyprus photo blog