My wife’s old shed has been removed from our garden by a pair of “rubbish stars”! 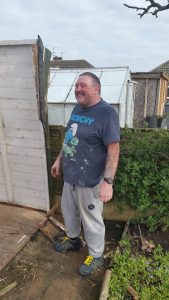 Grouchy and his Dear Friend, Hoggy

Never time to have a nap!

Lots of fun and loads of banter

“Cup of tea instead of Fanta!”

Once a butcher, Hoggy’s strong

Grouchy has a giant chopper

Guess which one is Yogi Bear?

Grouchy likes a glass of Whisky

‘Says it never makes him frisky!

‘Partial to an Irish Malt

Bushmills piled up in his “vault”!

Builders’ waste, no thing too big

Even do an Irish jig!  (After hours, of course!)

“Smashing time”, and with a smile

Rubbish in the neatest pile!!

Cheaper than a local skip

And his action’s “really hip!”

“Cheaper ones.. they are no-brainers!”

Hoggy, he is warmly dressed

Still he wears his Winter vest!

Grouchy with his chopper poking

After work perhaps a beer? (Or six?)

In this world: “Removal Kings”

A weekly collection of poems relating to everyday life in Cyprus.