A tour of Montaigne’s tower

The value of life lies not in the length of days, but in the use we make of them…

Whether you find satisfaction in life depends not on your tale of years, but on your will.

Perhaps you’ve seen the sign to la Tour de Michel de Montaigne enroute to or from the Bordeaux airport. If so, like me, you may have have been in too much of a rush to take the time to visit. I timed a recent airport pickup to include a couple of extra hours and hung a right off of D936 in Lamothe-Montravel, a few kilometers before Castillon-La-Bataille.

Michel de Montaigne was a renown humanist author and philosopher of the 16th century. His writings, according to a biography on the Université Bordeaux Montaigne website, remain relevant, possessing contemporary messages of “the qualities and faults of humans.”

His most famous work is Les Essais. He also kept a detailed journal of  his travels to Germany, Austria, Switzerland and Italy, which was stowed away in a trunk and not discovered until nearly two centuries after his death.

This trunk, along with other momentos of Montaigne’s life, can be seen at la Tour de Michel de Montaigne. The tower is where Montaigne did much of his writing and where he died in 1592. It is just across a large courtyard from the château, where distant relatives of Montaigne now live. (The château is not open to the public.) Before or after a guided visit, guests can walk through the gardens and admire a panoramic view across la valée de la Lidoire.

I am the only English-speaker in the group, but I have little trouble understanding our guide, a British university student, who has provided me with a written translation. We start our visit in la barbacarne, a fortified area with two doors, designed to trap unwanted visitors so they could not get inside the grounds or escape.

From here we enter the writer’s private chapel. Montaigne lived during the Wars of Religion, and he was a Catholic in Protestant territory. In his last years, Montaigne was confined to his bedroom in the tower due to ill health. In order to be able to hear mass from his bed, he had an accoustic channel installed between the chapel au-dessous and his bed chamber au-dessus.

We proceed up the tower’s narrow winding staircase to Montaigne’s library. Here, at the time surrounded by thousands of books, Montaigne did most of his writing. Greek and Latin writings are engraved in the ceiling beams and Montaigne would gaze up to ponder them. There was no glass in these windows, so he spent colder days in an adjacent, much smaller chamber, which contains remnants of the room’s original murals.

In addition to being one of France’s most important writers and thinkers, Montaigne also had an impressive career in public service including 15 years in the Parliament of Bordeaux and four years as the city’s mayor. 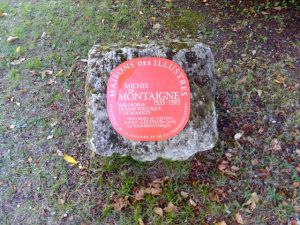 France was supposed to be only the first stop for American Mimi Beck Knudsen, who retired early from her job as a newspaper editor in Reno, Nev. But, love intervened in the form of a house, a village, welcoming neighbours and new friends in a country that has forever seemed to say, “Come hither.” Please also visit Mimi’s other blog, Away to Live.