The kindness of lorry drivers

It’s so simple nowadays.  If someone has a problem while driving, they reach for their mobile phone and ring a relative or friend, or their insurers or a breakdown organisation.  It’s very easy, and the result is that many people are even afraid to drive without a mobile to hand.  What a pity.  Once upon a time, it would have been necessary to find a telephone box.  They still exist, but there’s no longer a queue outside, or someone knocking on the door irritably while pointing at their watch (who uses a watch now, either?).  The phone box near me in England is uncared for and is used only by tourists on their way from the station – and by me when I want to call an 0800 number, since I no longer have a landline. Then, if there were no telephone box in sight, the traveller would have to find a house and knock on the door to ask the occupiers if it might be possible to use their telephone.  Nowadays, sadly, people are so suspicious of strangers  that you’d quite likely get the door slammed in your face.  (How likely is it, realistically and statistically, that a stranger knocking on your door will turn out to be psychotic or a criminal? Hardly.)

Anyway, when I heard recently that the sale of a very familiar house in the hilltop village of St Maurice-de-Cazevieille in Languedoc would take place this month, for the first time in nearly forty years, it brought back many memories.  For a year in the 1970s I lived in that house.  My then husband and I had visited it at Easter 1976 and had agreed to buy it for a lot of old francs, which worked out at about £12,000.  The French franc had been devalued in 1969, so that ten anciens francs was equivalent to one new franc, but many older people, especially in rural areas, continued to speak in old francs into the 1980s – and there were many cautionary tales of disastrous misunderstandings between French and English buyers and sellers.

The village was surrounded by vineyards, olive orchards and lavender fields; the house had once belonged to a mayor and had been a rather impressive house for its time; it was large with vestiges of old wallpaper, an impressive entrance with wide curving steps leading up to a first-floor terrace, and and a cosy little séjour with an elegant fireplace.  But it had been empty for a while; the only lavatory was a non-waterborne lean-to in the garden, and the single tap over the kitchen sink turned out, to our chagrin, to be attached to a pipe which led to nowhere.

We moved into the house in July that year, after a journey which could be described as an adventure… for me, at least.

We had bought a dark blue old Ford Transit which had made two previous runs down to the house loaded with furniture and so on.  The first person to make the journey was my stepson Quentin, who nobly did the journey on his own, sleeping in the vehicle both on the way down and on the way back.  The next people to make the trip were my brother-in-law and a friend, but the van broke down somewhere en route and they abandoned it.  A replacement pump was required, which we bought, and a gallant friend travelled by train halfway down France, got the van repaired and continued the journey to St Maurice and back.

My ex had drilled holes in the roof and attached wooden bars to create a solid roof rack, and we loaded the Transit for the last time and headed to Portsmouth for an overnight crossing.  The inside of the van was stuffed; on top, amongst other things, was a pile of bicycles.  At Cherbourg, we were stopped by curious immigration officials; what was in the Transit?  We opened the doors, looked helplessly at the jam-packed contents, and assured them that it was all old household goods; we didn’t mention the gerbils.

And so we set off.  We were going to swap about, but to start with John drove his old Hillman with my son David, aged eleven, in the passenger seat.  I drove the van, with my nine-year-old daughter.  All went well, and we paused somewhere south of Cherbourg for a breakfast stop before pushing on.  The plan was that the car would go ahead, and the slower van would follow.  Looking back later, it seemed not merely improvident but completely crazy that I had neither maps in the van, nor francs…

All went well as I trundled south through northern France as far as Chateauroux.  John had disappeared ahead.  The sun was getting high, and I was expecting to come across him parked by the side of the road for a picnic stop; and I suppose we had planned to swap vehicles at that point.  But there was no sign of the car.  At Chateauroux the signs for the next town, La Châtre, took us round a long bypass, and then we continued south.  I don’t now remember at what stage I became concerned, but having continued along this road for a while, I turned round and retraced our route back to Chateauroux, wondering whether the car had been parked off the road and I had somehow missed it.  But there was no sign of the Hillman, and so I turned round again and continued on our route.

Then the next problem began to manifest itself – I was getting low on fuel and – what idiocy – I had no money, or very little.  In the end I accosted an English lorry driver who had parked somewhere along the road, and asked him whether he would lend me some francs – which he did, a very generous gesture since he probably thought he would never see the money again (he did).  We got some petrol and a little food; I remember digging in the back of the van and coming up with a large incongruous silver-plated fish server – all I could find – with which to cut cheese.

But there was still no sign of the car, and we ended up parking the van by the side of the road – not right off it, in case John and my son came past looking for us – and sleeping (or trying to) on the verge.  In the morning, I had to face the fact that we were in trouble, and so I drove back to Chateauroux, where I found the commissariat – the police station – and drove in the gates.  By that time I was very short on sleep and my patience was wearing thin, and I remember walking into the office to be confronted by grinning policemen who had watched our arrival – the piled-high bikes on a battered old van – with amusement.  My French was more limited then, but annoyance always helps and I remember saying crossly, “C’est très amusant, n’est-ce pas?” before explaining our situation.  I think they were a bit nonplussed at first, and then we were ushered into the presence of the commissaire – the chief, an urbane and friendly man who promptly took charge of everything.  He said he would contact the local police in the Gard and get them to see whether John was at the house; if he were, he would be asked to give them enough francs to enable us to buy sufficient fuel to complete our journey, after which the commissaire would give us the same sum and we could go on our way.  Meanwhile, he would contact his wife and ask her to look after us, and so we were driven in a police car to the suburbs where his intelligent wife was bored to death and longing for a life.  She was genuinely delighted to be of help; we had showers and she gave us breakfast, and we talked.

Then the call came…  John had been contacted and had handed over the necessary francs; we could go on our way.  So we were collected by car and taken back to the commissariat, where our new friend gave us the cash and wished us well.  Some time later, he and his wife – sadly, I have forgotten their names – came to visit us at St Maurice-de-Cazevieille; it was very good to see them again, and in happier circumstances.

So… washed, fed and refuelled, we set off south again.  I was wondering, of course, what on earth had happened; what had John been thinking of, to continue all the way to St Maurice without us…

The drive was long and the van not the fastest of vehicles.  But I didn’t want another night on the road and we pushed on towards the Rhône valley and eventually onto the A7.  I remember hallucinatory moments when tiredness overcame me, but I was determined to get there and not to have another night on the road.  And so we got there, at heaven knows what hour.  We drew up outside the big metal gates, parked and climbed out.

The gates were locked.  I couldn’t believe it.  There seemed no way to get in; there was no bell…   In the end I parked close to the wall and my nimble daughter climbed onto the top of the Transit and over the railings onto the terrace above.  There was a bell beside the front door, I think.  John appeared.  I was absolutely furious – and wept with rage and exhaustion. 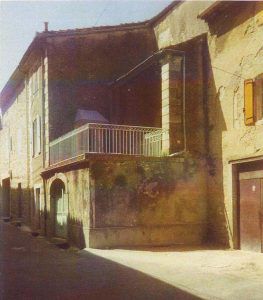 Jackie Becker lives in Haute-Savoie, in a small village at 900m where the cross-country ski trails wander around the old farmhouses.

For a few years she spent just the winter months in France, but the Alps are beautiful in summer and gradually she found herself spending more and more time in the mountains. She is constantly fascinated by the many contrasts between England and France.