I wrote recently about the memories of centenarians living in Savoie and Haute-Savoie, as recorded in the 2014 edition of the Almanach Savoyard.  But this year sees the centenary of the beginning of the First World War, and the Almanach also provides a compilation of local people’s indelible and poignant memories of the Great War, gleaned from past editions.

During July 1914, the mainly rural population of the two departements were occupied with the harvesting of the hay and the cereal crops.  Nobody on these remote farms could have imagined the terrible consequences of the international crisis which followed upon the assassination on 28 June in faraway Sarajevo of Archduke Franz Ferdinand of Austria, together with his pregnant wife Sophie, by a young Yugoslav nationalist.

Late in the afternoon on Saturday 1 August, while Léonard Ferrier and his family were in the middle of haymaking, one of the village lads came past the field ringing a bell, which would normally have been warning of a fire.  When questioned, he informed them that the government had just declared a general mobilisation.  Similarly, Ernest Ducrey, who lived at Ballaison, in the hills above Lake Geneva, recalled that the war had surprised them right in the middle of the cereal harvest.

At around 4 p.m., all the mairies in France had been alerted by telegram or, in a few cases, by telephone.  The church bells sounded the tocsin.  Leaving their work in the fields, the men ran to their mairie to find out what was expected of them.  The general mobilisation was effective from 2 August – the following day.  Each reservist rushed home to find his carnet militaire within which were his call-up instructions; these told him at which barracks to present himself on the first day of mobilisation, by not later than 10 a.m.  Astonishment began to be mixed with consternation.

Within a few days, the countryside was empty of its able menfolk.  Léontine Couturier, who was 13 in 1914, recalled, “I was in the pastures with my two brothers, when the elder was called up, leaving us alone.”  Sometimes, all the men in a family were immediately mobilised; Joseph Métral, of Grand-Bornand, was called up together with his two sons; one would never return.  In the little hamlet of Outrechaise, near Ugine, Francisque Personnaz, who died in 1996 aged 100, left together with his six brothers; he was 18.  Most of those called up would join units which were garrisoned in the region.

Surprise was followed by horror and then by resolution.  Contrary to popular myth, the French didn’t depart “la fleur au fusil”; they left their families without joy but with the firm intention of doing their duty.  And with the conviction that the war would be short.  Mlle Perrot recalled, “I watched the soldiers marching from the barracks to the station in order to leave for the front; who would have known then that so many of them would not come back?”

When asked about the war, Jean-Baptiste Burdin, who came from Beaufort and who had fought at Verdun and the Chemin des Dames, replied laconically, “The war? Carnage.”  I quote Wikipedia: At the disastrous Chemin des Dames offensive of 1917 . . . [the poilus – the ordinary infantrymen] were said to have gone into no man’s land making baaing noises – a collective bit of gallows humour signalling the idea that they were being sent as lambs to the slaughter.

General Jean Vallette d’Osia, who died in 2000 at the age of 98, exclaimed of the bayonet charges, “Tchac, I thrust in! Tchac I withdraw . . .”  Frédéric Charplot recalled, “A bayonet thrust perforated one of my lungs, and I was left for dead, in the Vosges. Some locals found me the next day. I was operated on without anaesthetic.”  Injured in the elbow by Austrians on the Italian front, Francisque Personnaz lay for hours unconscious in the snow.  “Eventually, someone pulled on my injured arm.  The pain revived me and the first words I heard were, ‘Oh him, he’s not dead.’  The cold had stopped the haemorrhage – but I left my arm there.”

On 18 June 1918, in the Aisne, Albert Piton was buried alive twice as a result of two actions in the same day.  “Early in the morning, I was hit in the thigh and unable to move, during an enemy counter attack.  My position was bombarded by our artillery.  The earth thrown up by the shell almost entirely covered me; only my head was showing . . .  In the evening, I was at last rescued.  While I was being transported by ambulance, our convoy was bombarded, by the Germans this time.  The vehicle turned over, and I was buried yet again!”  M Piton said that he was lucky to survive, a comment often repeated by the old poilus.  Albert Derrier from the Maurienne commented on his exceptional luck in having survived passing a hundred times through hails of bullets without having been injured.

During the four years of conflict, there were few periods of leave for the combatants.  If they did get home, soldiers such as infantryman Albert Bain were evasive in speaking about the war, in order not to distress their mothers.  One conscript, after telling his story of the bloody action at Chemin des Dames, added, “On my next leave, my mother took me to Geneva to have some photos taken, which she intended to pin up round the walls.  I commented to her that I was not yet dead . . .”

Back at home, the four years of the Great War took its toll on the traditional patterns of life.  In the countryside, the women took over the running of the farms.  “We had to wear the trousers for four years and toil like men,” said Renée Fayan.  The work in the fields was made harder by the fact that the farm horses had been requisitioned for the war.  Thankfully, said Yvonne Duret of Habère-Poche, we gave each other a lot of support and assistance.  Instead of continuing their studies, many of the children had to leave school at the age of 12 in order to help on the farms.  An example was Joanny Chauland, a young man who was born in 1902 at La-Motte-en-Bauges.  “My future was derailed by the war. I was an excellent pupil but I wasn’t able to continue my studies . . .”

The conflict continued, and the authorities set up measures to support and feed the troops.  From 1915, exceptional leave was granted to farmers during the harvest and the haymaking, and their military rations were given to their families.  Nevertheless, “the soup was often thin”.  The privations were worse in the towns.  In Chambéry during the cold winter of 1917, Françoise Bavuz found a lump of coal lying in the gutter.  “I carried it home like a precious object,” he said, “wrapped in my handkerchief.”  “Life was hard,” said Georges Chabod, born at Geneva to Savoyard parents.  “The public parks were transformed into agricultural areas.  But in spite of that, we had only poor-quality grey bread to eat.”

The war dragged on, adding to the anguish of those left behind.  Soldiers wrote home on official cartes de correspondance issued by the army.  “My father wrote to us twice a week,” said Marie Pellet.  “At the least delay, our worry increased.  We had just one fear. . . to see the arrival of the mayor and the gendarmes; that would mean that the worst had happened.”  That worst was described by Suzanne Olivères of Fréterive.  “One day, by chance, I overheard a lad of the village, who had just arrived on leave, saying that my brother had been killed at Chemin des Dames.  The news had not yet reached us, and I ran home at once to warn my mother.  I was five years old.”

And yet, as at the front, morale was maintained.  “I have not heard it said that in our region, doubts were ever expressed about eventual victory . . . The losses endured by families were borne stoically and in silence,” wrote the sous-préfet of Bonneville in 1916.

On 11 November 1918, Germany signed the armistice in the Forest of Compiègne, and the church bells of France at last rang out the victory.  Long awaited, this day remained for ever in the memories of those who were there.  “I remember it as though it were yesterday,” said Marthe Chenu, of Tresserve.  “We trembled like leaves as we dared to believe the news.”  At Grenoble, according to Geneviève Gobelin, “in spite of four years of suffering, of privations, and of mourning, joy predominated.  In the Place Grenette, on the steps of the Hôtel Moderne, a well-known singer sang La Marseillaise for the crowd.  But at Chambéry, “there were no cries, no tumult”, according to the Patriot Républicain in its edition of 16 November.  And all over France there were those who had stopped receiving letters from the front, and who feared the worst; they could not celebrate.

And the euphoria of victory, where it manifested itself, would be ephemeral.  The dominating sentiment was simply relief:  relief at the eventual result of four testing years, relief especially at the return of husband, father, brother or son.  Antoinette Vignon never forgot one day in December 1918: “I was fourteen.  A few days before Christmas, a man knocked at the door of our farm.  Bearded, he had a white and emaciated face, and carried just a small bag.  It took me a moment to recognise him: it was my father.  After being mobilised in 1914, he had returned home on leave just one single time before being taken prisoner.  That was the most wonderful Christmas of my life.”

Frequently, children encountered a father they had barely known.  “I saw a soldier arrive in the courtyard of our farm,” recalled Odette Regache, who had been born in 1912 and was thus six at the end of the war.  “He looked at me and called my name.  Frightened, I cried out; the unknown man began to weep.  It was my father, who had come home . . .”

The soldiers brought home with them the scars of the trenches.  There were the physical injuries, and long after the end of the fighting, the war would continue to kill; an example was the husband of Julie Theurel-Moles, of the Pays de Gex, who died of his wounds in 1926, leaving her alone with four children.  But the invisible, psychological trauma was deep.  The returning soldier had to take up the course of a normal life, after the abnormal stresses he had endured.  Most chose to remain silent about the unspeakable experiences of the trenches and what they and their comrades had endured; they shared these memories only with their brothers at arms, in the bars or in the old soldiers’ associations.  In 1998 Eugène Pinier, who had fought at Verdun, was visited by a journalist; he said he preferred to avoid talking about the war, for “it still gives me nightmares”.  Sometimes, a veteran’s protective carapace gave way a little.  “My father never spoke about the war,” recalled Hermance Sonjon, of Cluses, “but then one day, years later, he took me to the Douaumont ossuary at Verdun, the place where so many of his comrades fell.  For the first time in my life, I saw him cry.” 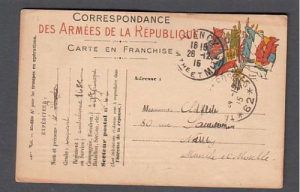 * From Remorse by Siegfried Sassoon

Jackie Becker lives in Haute-Savoie, in a small village at 900m where the cross-country ski trails wander around the old farmhouses.

For a few years she spent just the winter months in France, but the Alps are beautiful in summer and gradually she found herself spending more and more time in the mountains. She is constantly fascinated by the many contrasts between England and France.