The abbreviation FAQ is quite recent, and ubiquitous; the Fine Arts Quartet is neither. And we have just been treated here in the South of France to two rare concerts in two days by this legendary ensemble.  I had wanted to mark the passing of Sir Peter Hall and Sir David Tang, but they have died recently, whereas against the early goldening leaves of our sudden autumn – and against my instinct not to clutter my blog with reviewing – I prefer to sing out loud the glory of this live music-making.  At Beaulieu, as part of the Classic Festival, they played Dvorak, and in Fayence, as part of the String Quartet Festival of the Pays de Fayence, they played Bach, Barber, Bruckner and Beethoven.

It is an extraordinary story: the quartet was founded in 1946 and the personnel has changed both much and little since.  There have been only two leaders at the first violin desk, but the other three desks have seen more frequent change.  And as a record collector I would say that the early reputation was for an extreme precision but also a wiry, taut sound, which suited their devotion to new music and indeed especially to new American music.  The precision has remained but the taut sound has evolved to an exceptional exchange between lean and lush, and to a bewilderingly apt subtlety of tempo.

The highlights were the Dvorak so-called “American” quartet (Beaulieu, Saturday 16th) and Beethoven’s vast Op.131 (Fayence, Sunday 17th), in both of which the sheen of precision was finely matched by our feeling of the raw presence of the fiddle.  In the Dvorak especially, a piece riddled with the influences of native folk music, I had never before heard so well the lurking open-air barn-dance element that is 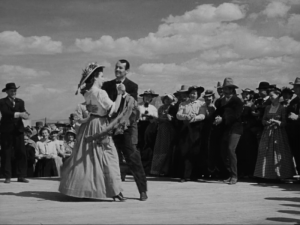 epitomised by the shindig scene with Henry Fonda in John Ford’s “My Darling Clementine”.  (Oddly also 1946.)  Even in the Beethoven, written for the quartet led by a man with the fiddle-rich name Schuppanzigh, the man who complained of the technical difficulties and to whom Beethoven famously retorted, “What do I care about your damned fiddle?!” – even here we were treated to rare insights of the flowering of folk instinct into high art of the deepest humanity.

From the audience’s earpoint, the cute theatre at the Casino de Beaulieu gave a clearer accoustic, and a war-horse such as the Dvorak was revealed to have an embroidered intricate texture often overlooked – and helped by what I take to be the old-fashioned seating, with the violinists opposite each other and the ‘cello facing us.  Oh, and this and that, never mind reviewing, you’ve missed it, I’m afraid.  But I reflect upon the miracle of it all.  Four chaps correctly dressed, with an exhaustive repertoire of music intimately prepared and understood on an endless discovery, sway, glance and smile through these journeys of passion and calm, quirk and control.  I could not take my eyes off them but I was in the presence of the composers nonetheless.  Once, just once, the violist looked heavenwards, in the church of Fayence, as if blessing the blesser, and towards the end of the Beethoven the second violinist, the least demonstrative of the four, began to smile with the inner thrill so simply expressed by D. H. Lawrence in his phrase, “Look, we have come through.”

Light came from sound.  There are frequently asked questions; fewer are the irresistible answers.