This week sees Mozart’s Nozze di Figaro come to Nice Opera.  “The Marriage of Figaro”.  Go.  (And to those who disobeyed last week, not going to the Vienna Philharmonic in Monte Carlo, hide in shame.)  There are four performances, on the 19th, 21st, 23rd and 25th.  The Sunday one on the 21st is at 3pm, the others at 8pm.

In the 1970s The Times had a columnist called Bernard Levin, a somewhat smug, self-satisfied chap who hardly slept.  Therefore he had swathes of time for reading and, oh dear me yes, writing.  His quirks formed part of my youth: I recall, he wrote a book about Hannibal’s traipse across the Alps, and about his own dissection of the United States achieved by traipsing up every single address on Fifth Avenue, New York.  (In those days Harlem was not chic.)  He also championed causes with power and persuasion and uncommon journalistic thoroughness.

He also declared that The Marriage of Figaro was the perfect opera.  Though now that I recall, I think he had hankerings towards Die Meistersinger, about which he wrote with unnerving perspicacity of Norman Bailey as Hans Sachs.  (The performance has survived by a miracle: click here.)  So, as a strapping aesthete I rushed to hear Dietrich Fischer-Dieskau as Figaro at an Edinburgh Festival, and have learnt my lesson: he was inhuman, loathesome, blusteringly brutal.  But, I had also thus learned why Figaro just might be the greatest opera – its humanity, pathos, wit and zest are life itself, which DFD just didn’t get. 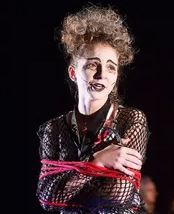 It also has a he called Cherubino who is sung by a she.  (Perfect opera.)  And just a moment ago I received an e-mail from Scotland telling me that in Nice the he-she will be sung by Svetlina Stoyanova which, till four this afternoon, I would have supposed to be a boutique vodka.  No, this is a Bulgarian mezzo who last year won the Neue Stimmen competition and is part of the innovative and energetic Live Music Now Scotland network.  None of that will mean a thing to you.  Don’t worry, just go.

The blah is here: http://www.opera-nice.org/fr/evenement/241/les-noces-de-figaro and despite the fact that the cast list for this new production includes credits for video, always a depressant, you won’t regret a magical couple of hours at the weird beating heart of life and love, even if you shut your eyes.  Maybe more so.