Seeking the Cool from a Sizzler 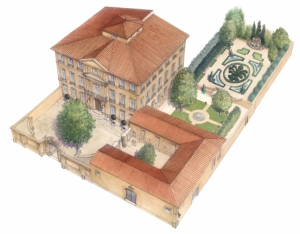 This weather! I have been lazied by the heat more than any summer I can recall. I read of rain in Scotland with envy. To meet a friend I traipse across the desert to Aix-en-Provence, and there I find my day of grace, in the shade of the landscapes of Alfred Sisley.

The ever-wondrous 17th century Hôtel de Caumont, a block off the Cours Mirabeau, this sizzler summer hosts a wonderful show of about sixty paintings by this English painter who out-Frenched the French. He was born to the purple, to a wealthy mercantile British family, in Paris, in 1839, and it is most of all his vision of the rural suburbia of Paris that has given his name its stamp. Sisley almost never makes a portrait: homely views of the nature and streets in which we make our habitat were his happiest themes.  They quiver to the joy of humble observation and a belief in the potential for joy in the world around us.  You step back into the (happily now almost car-less) narrow streets of old Aix with a sense of gratitude.  He was a pioneer Impressionist and while his palette and mastery grew through his life, he was contentedly less adventurous than his confrères such as Pissarro, let alone Monet, whose later years stretched theory and sensuality almost to the point of abstraction. 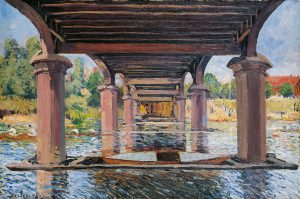 Having said that, the bold picture shown here – the underside of Hampton Bridge [now at the Schweizerisches Institut für Kunstwissenschaft, Zürich] – breaks the mould.  Usually Sisley has a careful and poised attitude to composition, a firm horizontal and deftly choreographed uprights, but here we have a rare confrontation between scenery and machinery.  Even rarer, for Sisley, we have the sky all but obliterated by the bridge, and a Sisley sky is a joy for ever.  Clouds float and jostle, we are in weather, and sense the warm or the cool, the wind or the still, with uncanny expression and a naturally loose but cunning brush technique.

And although it may not entirely count as ‘adventurous’, Sisley was one of his generation who liked to paint in series.  Yes, Renaissance artists all managed dozens of Births of Christ, if you like, and an element of same-theme is inevitable in any artist’s work, but Sisley and Monet exploited the idea of series in a manner that was to be followed by as diverse figures as Pollock, Picasso and Hockney.  Indeed, this ‘idea of series’ is vividly displayed here by a screen in which successive paintings, viewed from more or less the same vantage, melt one into another following the seasons; it may even have been inspired by the Hockney movie collages that were at the Tate and are now at the Pompidou Centre, as discussed in my first blog.  (See http://www.davidhockney.co/works/digital/movies and click on Four Seasons.)  At any rate, it is very well thought through, as is the whole show.

The Hôtel de Caumont is a perfect setting: however grand it was as a home, you walk in rooms that have the scale of lived-in rooms, unlike a gallery, and outside is the gloriously decorated garden – admittedly, in August, under a fierce sun and cloudless sky we haven’t had to survive in the paintings.  At least there you can find wine.  And shade.

The site is at http://www.caumont-centredart.com/en/home and the show is up until 15th October.