The Fan Who Mistook My Hat For A Hockney 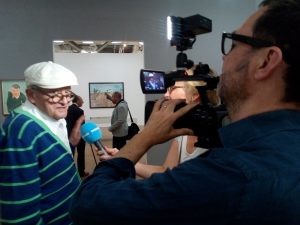 Well, my first blog for AngloInfo. Daunting as a blank canvas. I look back at those old copies of The Spectator that Dad used to read, with their High Life and Low Life columns – precursors of the blogger’s style-book.
So for my first shot I shall go for High Life…

A few weeks ago I was invited to the private views of the Hockney exhibition that has transferred from the Tate to the Centre Pompidou, otherwise known as the Pompidou Center, till the autumn. If you can survive the sunny-side plastic-tubed escalator all the way to the top, go. Even if you have seen the show at the Tate, this is different, and will be more satisfactory than the third and final manifestation in New York over Christmas.
The usual applies: the rooms are more spacey and the selection slightly more judicious. Note that while the show spans the entire artist’s career, this is not really a retrospective, as many aspects of that career are missing (theatre) or under-represented (drawings, portraits). But it is an A-Z of extraordinary oomph.
One of the happiest rooms is a corner room in which almost all the paintings show windows or people looking, and it is a room with slitty tall windows upon Paris – and into other rooms where people are looking at pictures. It is a deft wit, the brainchild of Didier Ottinger, who has known and followed DH’s work for decades.
And one of the happiest chappies at the openings was the artist himself – if you discount Wayne Sleep, who unslept his way round dancing the cha-cha – who, since the London showing, has started to paint again. It’s all too trite to say that the A-Z of the show seen in London gave him a perspective upon his momentum, but it is fairly true. The final room has the strangest canvases in which his grappling with perspective marries with a taste for gestures and objects in paint that harmonises with his earliest paintings, a taste that the most recent big tree pictures had by-passed.  These canvases were done in L.A. immediately after London.  Unstoppable.
Complete with Charlie Chaplin stick, DH potters as gently as he can through the galleries till the urge for a gasper gets the better of him. Then off to the sunny terraces atop the Pompidou. 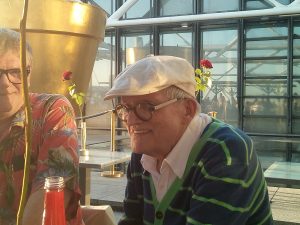 Here there was champagne and edible thingies, the artist happy with a Davidoff ciggy. Fans, groupies, the circus and crashers mingle, drawn variously by the great man and decent froth.
I mingled, hailing and hugging, sometimes at random. Then, summoned to summon someone, I placed my panama where I was to guard my place, I set off into the buffet fray. A humble hat, bought for £25 in a university town, the sort of robust rollable panama the British prefer, especially to umpire in, and which sported an Opéra de Monte Carlo clip, I should add, seen below for the last time. Upon my return it had gone, never to be seen again.

To be sure, a fan had taken my hat for a Hockney.  Who these days wears a cap.  Keep up.