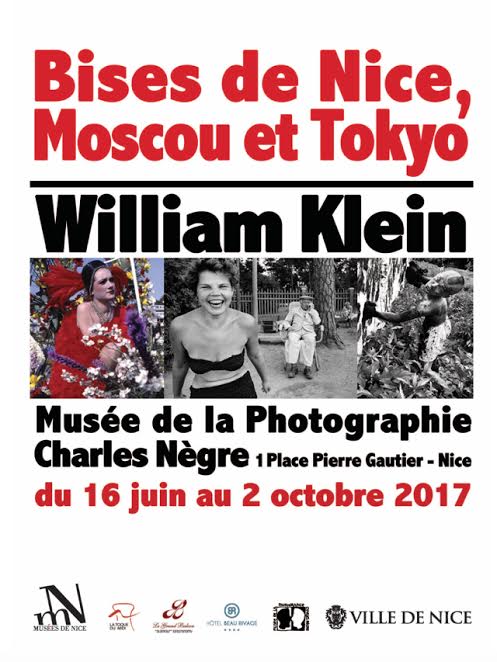 When William Klein was asked to do a photo-shoot for Vogue in New York City in his mid-twenties, he decided to use a telephoto lens and take the pictures of the models mixed up in traffic and cars from quite a distance. Passers-by stared at the girls but the photographer was nowhere to be seen. It caused a sensation.

William Klein is, however, famous for his use of the very wide-angle lens, close-up to street scenes and interiors that were often action-packed with the people of the cities he concentrated on – most notably New York and Paris. In an art whose most obvious tradition was careful composition and focus, these photos also caused a sensation for their spontaneity and apparently guileless technique. Fly-on-the-wall technique was born here.

Now one of the big names in the history of photography, Klein comes to Nice this summer in an exhibition at the Musée de la Photographie Charles Nègre on the big square just off the middle of the Cours Saleya in Nice. His relationship with the south of France goes back a long way, to a brief apprenticeship with Fernand Léger.

The show runs until 2 October and is entitled Bises de Nice, Moscou & Tokyo.

His first wide success as a photographer – he has been an artist and film-maker too – was with his book on New York (1956) following which he won the prestigious Prix Nadar. The current show focuses on three other towns including Nice, where, in 1984, Klein pointed his camera at the Carnival in its centenary year – colour images that are less known.

Then Moscow, of which images taken between 1959 and 1961 were published in 1964, at the height of the Cold War; Klein was surprised at how easy the project was, not least because in those days it was rare to see someone carrying a camera, especially in Russia. So he went largely unnoticed.

Third, Tokyo, again images from around 1964, large in scale and including his trademark contact sheets with the heavy red penciling to frame his preferred shots.

In this age of ubiquitous cameras and prolific photographs we lose track of whether we’ve looked at or not, this show will be stimulating for its rare dialogue between an exact craft of the eye and that instinctive buzz of fly on the wall.

For further information about this and other exhibitions taking place this summer, see out Events Guide.

Make the most of your life on the French Riviera!

There is always something going on here, for all tastes and all ages.

We will explore the many places and events that makes this place so special, and we would love to hear your thoughts and suggestions in the comments!