Blockhead Building gets a Thumbs Up 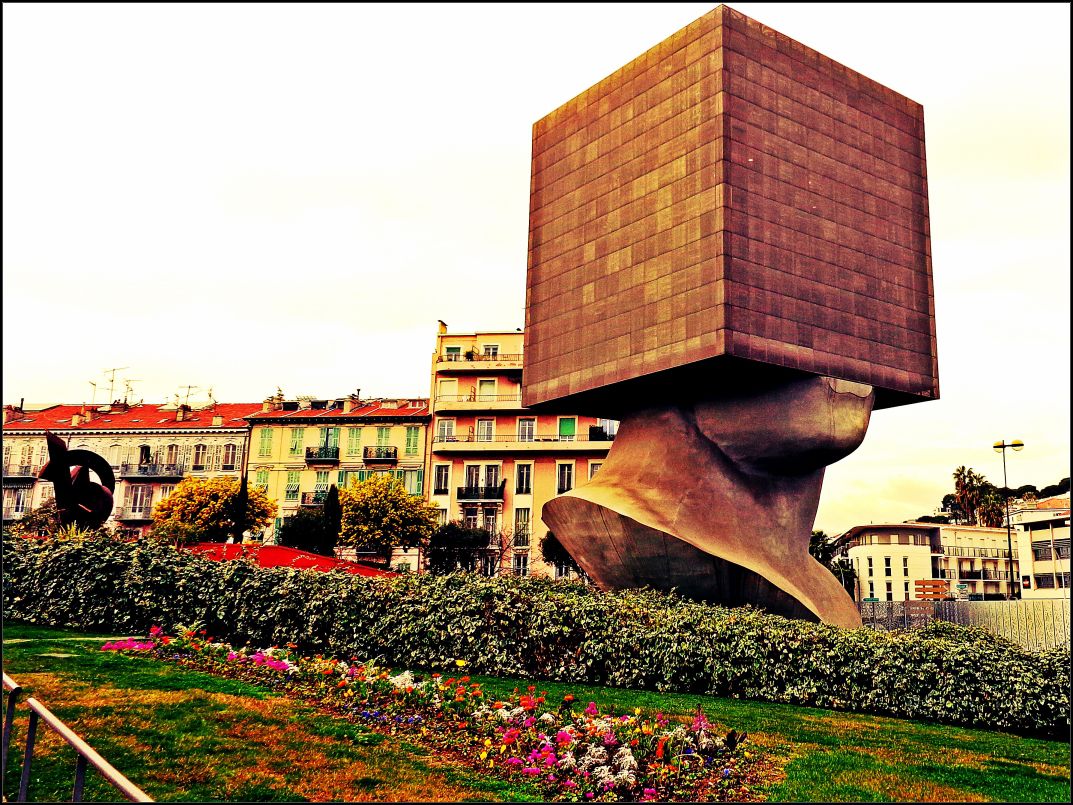 I have to say that normally I’m not a fan of modern architecture. I prefer the grand old buildings from the Belle Époque, and Art Nouveau just sets my heart aflutter. But there are a few modern structures that I really appreciate and one of them is in Nice, France. I lovingly call it the “blockhead building” but officially it’s known as la tête carrée, or “the square head”.

Headquarters
This building is the administrative “headquarters” for the library just next door. It has seven floors: three in the neck and four in the head. It’s claimed to be the first, habitable sculpture in the world.

You might wonder how the 40 or so people that work inside the building manage without any windows (at least that’s what I was wondering). The secret is a sheet of perforated aluminium which covers the exterior and acts like a sheer curtain, allowing those inside to see out, but those outside can’t see in. This is too bad, because I would really love to have a peek inside. Unfortunately it’s closed to the public.

Art becomes architecture
Yves Bayard was the architect who designed the adjacent library building and then he won the contract to build the administrative offices. For years, he had toyed with the idea of turning a sculpture into a building and this seemed to be his chance. He enlisted the help of his Niçois friend and sculptor, Sacha Sosno. Sosno had already created several small sculptures in the “square head” style and together they started working to turn one of these designs into a habitable piece of art.

Sosno had previously worked on a project in Nice that combined sculpture and architecture, the hotel Elysée Palace on rue Honore Sauvan. This is another building that I enjoy. He was responsible for the gigantic bronze women sculptures which seem to be stepping out of the sides of the building to avoid being squished. Sosno showed us that art and architecture could be beautifully combined. According to him, the best galleries for sculpture are city streets, beaches, and squares: the places where it can be seen and enjoyed every day.

Now you see it, now you don’t
Sosno explained his style as the concept of obliteration. Parts of his sculptures are hidden, or nonexistent, in order to let the viewer visually reconstruct the work. He said that he did only 50% of the work and the viewer must create the rest.

We can see this idea in action with the “blockhead” building. It’s easily recognisable as a head but when you think about it, there are no facial features, it’s not even round. But because the bottom clearly represents a neck and chin, we finish the sculpture in our imagination by thinking of it as a head.

The intriguing tête carrée building sits at the end of the Promenade des Arts, along which you will find the library, the Museum of Modern Art and the National Theatre of Nice.

All thumbs
If you leave the “blockhead” and the Promenade des Arts and wander down into the Old Town, you can find another “body part sculpture”. I like to imagine an underground giant with his head sticking out by the library and his long arm stretching out to the Old Town where his thumb pops up in front of the hotel de ville, or “city hall” to give us an oversized “thumbs up”.

The creator of this big bronze thumb (pouce in French) was a French sculptor called César Baldaccini. He also created the bronze trophy which is presented at the César ceremony for French Cinema, which is the French equivalent of the Oscars.

Give him a big hand
In 1965, César was invited to participate in an exhibition called “The hand, from Rodin to Picasso”. Since none of his works at that time fit the theme, he started making moulds of his own hands. He had just discovered the pantograph machine which allowed him to easily enlarge his sculptures and so he did.

Now César’s larger-than-life bronze thumb sits in front of the city hall. He produced six of these pouce sculptures and the one in Nice is the smallest, at only 1.85 metres (6 ft.) tall. The largest is 12 metres (39 ft.) in Paris and the other four are six metres (20 ft.). 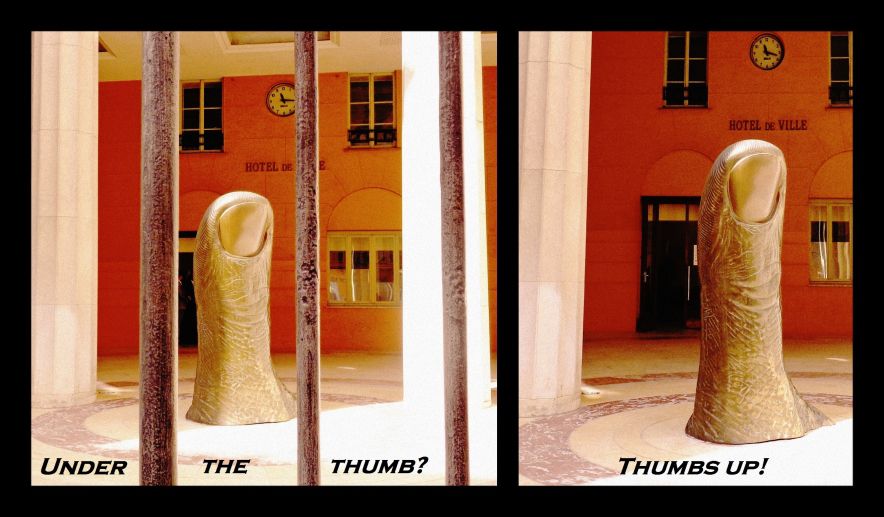 Under the thumb?
We were standing outside the tall iron fence that encloses the courtyard of the hotel de ville when we pointed out this sculpture to some friends. When I mentioned that this is where marriages take place, our friend immediately thought of the expression “under the thumb”. (I think he was influenced by the iron bars.) I don’t know if there is any symbolism intended here, but if there is, I much prefer to think of it as the more positive “thumbs up”.