If you have ever been in Nice, France, you may have been startled by a very loud noon time boom.  It occurs every day at precisely 12.00 and is a remnant from the Victorian times, when a British wife couldn’t remember to go home for lunch.

How a Scottish Lord got his Wife’s Attention 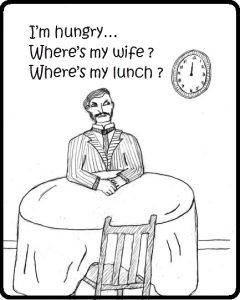 It was 1861, it was lunchtime, and Thomas Coventry-More was hungry.  This Scottish Lord (let’s call him Tom) and his wife were spending their winter in Nice, as usual, and the missus was late coming home for lunch, as usual.

Every morning she would go out for a stroll, meet other British ladies, and spend hours gossiping about who was doing what on the French Riviera.  She often forgot all about having lunch with her poor husband who was sitting at home waiting for her.

Tom was an ex-British army officer and a punctual man.  He wanted to eat lunch at the specified hour and not one minute later.  But he was also a problem-solver, so he set out to solve this one. He thought about his army experiences and in no time he had a plan, a perfectly simple plan.  He went to the Nice city council, since he needed their cooperation, and explained his brilliant idea. 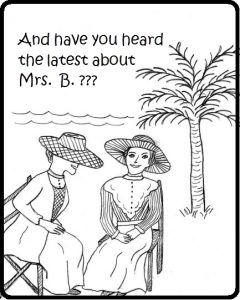 To make sure they had understood his Scottish accent, they repeated his proposition. -“You want us to go to the top of the hill everyday at noon and shoot off a cannon, which will surely frighten our citizens, just to remind your wife to come home for lunch?”

-“Yes, that’s it, old chap, you’ve understood perfectly.  Of course, since it is mainly for my benefit, I will pay all of the costs and I even have an old cannon laying around that I will donate for the task.”

The council huddled together to make their decision. -“These English are crazy (to the French all British are English – even if they are Scottish). -Yes, they are crazy, but he is going to pay…  -It will frighten people at first, but then the Nicois (people of Nice) will get used to it, and it will only frighten tourists – that could be fun.” 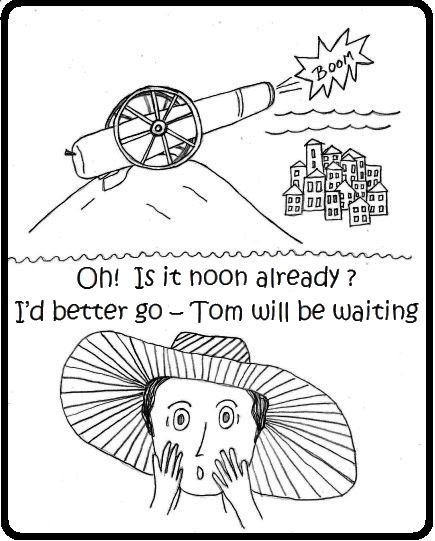 -“Wonderful!  I will arrange everything and we will start next week.  You have your man up there by 11.45 and the cannon will be fired at 12.00 precisely.

All went along very well like this for years, until finally Tom and his wife stopped coming to Nice.  Since he was no longer paying the expenses the council stopped firing the cannon.  Havoc must have ensued in Nice.  Everyone was late for their lunch, and some even missed their lunch altogether – all because there was no cannon fire to remind them.

Well, this was just not acceptable and the council had to reinstate the noonday signal.  Of course, today it is no longer a cannon that we hear, but a firework.  It is still set off manually each day at noon and now the Nicois never miss their lunch.  Even if they have grown so used to the midday boom that they hardly notice it, they know it is lunchtime when all the tourists jump.