Crazy Calendar of a Revolutionary Republic 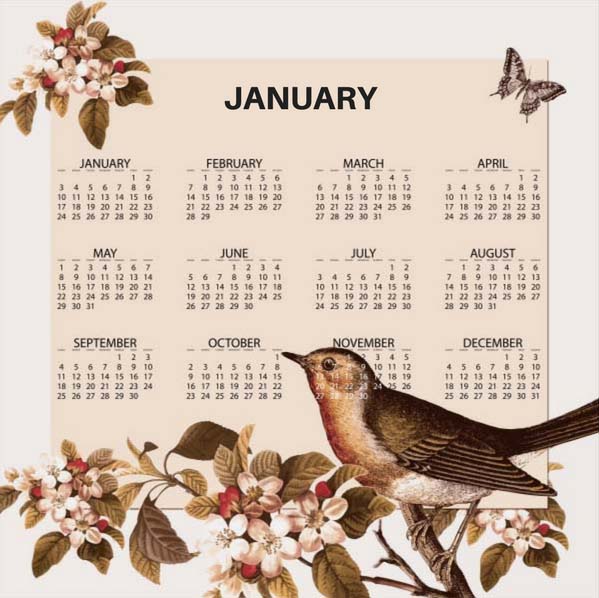 The French Revolutionaries weren’t content with just changing their government. They wanted to change everything – even how they kept track of time.

The old Gregorian calendar was filled with religious holidays and saint days, and that just wouldn’t do for the new Republic’s idea of Separation of Church and State. So a committee was formed to design a more suitable “Republican calendar”. This group of learned men included politicians, mathematicians, astronomers, a chemist, a gardener, and a poet. (Shouldn’t all committees include a poet?)

The first order of business was to set a start date for their new calendar. All agreed that since the formation of the Republic was the beginning of a new era for France, everything should be dated from then. It just so happened that September 22, 1792 (the date the Republic was established) was also the Autumn Equinox. It seemed that even the planets had aligned to celebrate the new age of the French Republic. So September 22, 1792 was declared day 1 of month 1 of year 1.

Moving along, the mathematicians decided that some things could remain the same. The year could still be divided into 12 months, but everyone agreed that the months needed a major revamp. 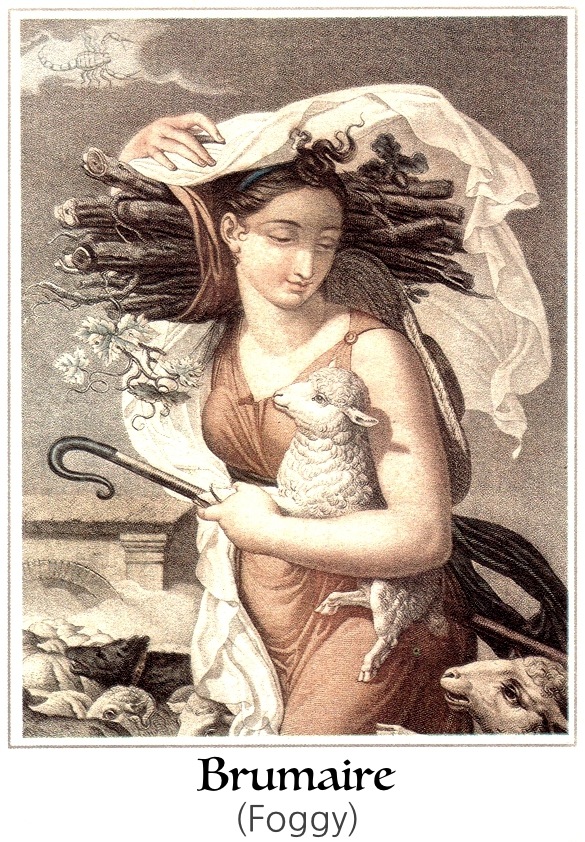 What Month is It?

First of all, the months would need new names. While the committee had nothing against the Roman gods who presided over the old Gregorian calendar, they wanted their “Republican months” to be inspired by nature. The new month names would reflect weather conditions during that particular time of year. And this is where the poet came in – after the astronomers and the gardener determined the normal climatic conditions for the month, the poet coined an appropriate name.

Each season was made up of three months whose names had the same rhyming ending. For example, the winter months were Nivôse, Pluviôse, and Ventôse.

The year started in Autumn since that was when the French Republic was born. The first day of the year was Vendémiaire 1.

George Ellis, an English satirical poet, was so inspired by the descriptive French months that he decided to write a poem suggesting his own tongue-in-cheek names for the English calendar, but he kept January as the first month. It’s surprising the British didn’t take to these catchy calendar names. 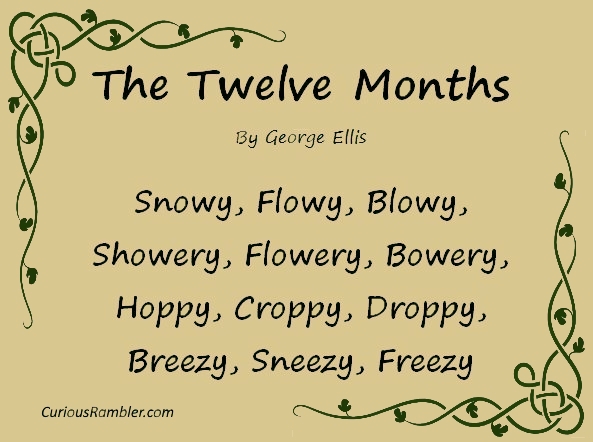 After the months were all named, they were divided into 3 ten-day weeks, called decades. The committee must have been getting tired when it came time to name the 10 days of the week though. They were called primidi, duodi, tridi, etc. That basically means, “first day, second day, third day, etc. up through tenth day.” And the tenth day of every week was special – it was a day of rest.

After each month had been assigned its 30 days, the committee found they had some left-overs. There were five extra days at the end of the year (or six extra days in leap year) which didn’t belong in any month. These days were proclaimed as national holidays and named after Republican qualities. They would be known as Virtue Day, Talent Day, Labor Day, Opinion Day, and Honors Day. The leap year holiday would be Revolution Day. 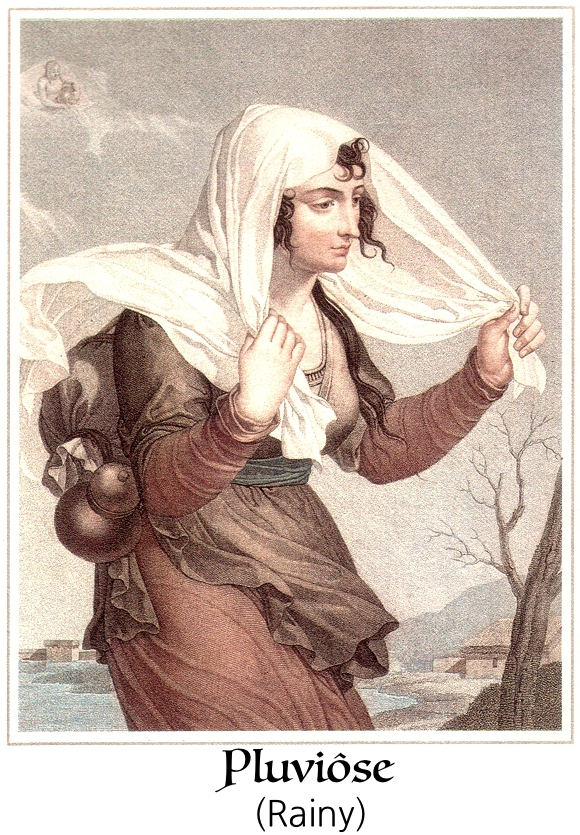 They were almost finished, but they still had to deal with “saint days”. Under the Catholic Gregorian calendar, each day of the year was named after a saint. It was almost like a little second birthday for the person whose name matched the “saint of the day”. They might receive a little gift, or at least people would wish them a happy “name day.”

But under the Republican calendar, there would be no saints. Each day was given a name from some aspect of rural life. They were named after animals, plants, minerals, and farm implements.

When the committee finally finished their Republican calendar, they were pleased as Punch with the “improvements” they had made. It got the stamp of approval and went into effect October 6, 1793. But it wasn’t without its problems…

First of all, the French people were pretty clever, and they noticed right away that they now had to work 9 days before getting their “day of rest” instead of 6 days under the old calendar.

Secondly, month names described weather conditions in northern France. What about the southern part of the country? Or the nations France conquered and imposed their calendar upon? For example, tropical African colonies that had never seen snow, would have a month called “Snowy” – it just didn’t make sense. 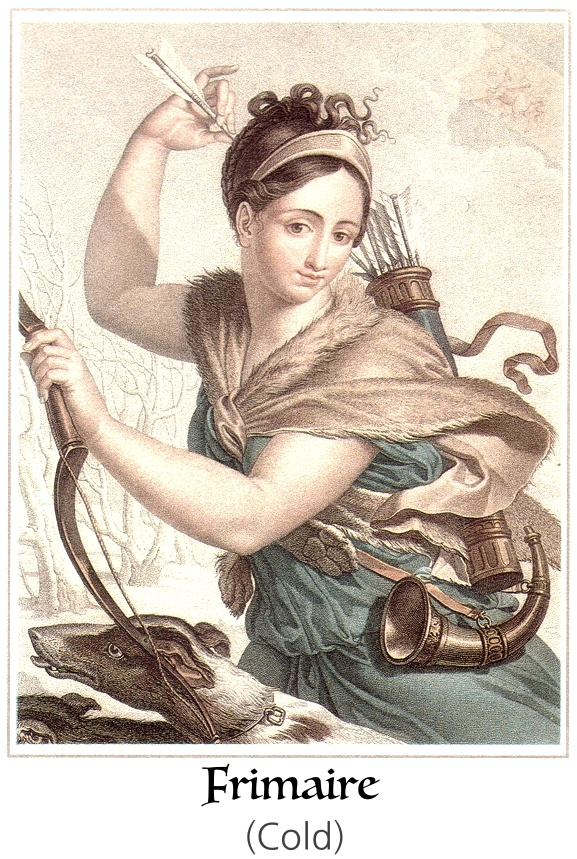 Thirdly, people rather liked their “saint name” days. Was anyone going to think about buying them a gift or wishing them well on turnip day or billy goat day?

And finally, there were no holidays except the five or six days at end of the year! What French person could wait 12 months for a holiday?

With 9-day work weeks, month names that only described northern France, no “second birthdays”, and no holidays until year end, it’s surprising the Republican calendar lasted the 12 or so years that it did. It was used from 1793 to 1805 and again for 18 days in 1871 during the Commune of Paris (an insurrection that lasted 2 months).

Napoleon finally put France back on the Gregorian calendar January 1, 1806 as part of the Concordat of 1801, which was an agreement that improved relations between France and the Catholic church.