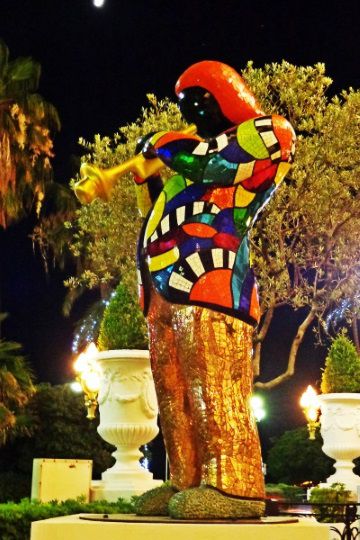 France has a special place in its heart for jazz and in the summer, you’ll find jazz festivals all over the country. In fact, the world’s first international jazz festival was held in Nice, France in 1948. But France’s relationship with this music started some 30 years earlier during the World War I and developed under some interesting circumstances during the Nazi Occupation of World War II.

Jazz comes to France
During World War I, African-American soldiers introduced France to jazz. After the war, this lively new sound was the perfect accompaniment to les années folles, or “the crazy years”, when all art forms were changing and tastes turned to the unconventional and exotic. This new African-American music made people feel alive again, just what was needed after the horrors of the First World War.

Hot Club
Jazz was especially appreciated by the young and in the early 1930s, a group of Parisian students formed a jazz club. At first they just met to listen to the music, but later they became ambassadors of this new sound. The Hot Club de France quickly grew into an important organisation working to promote jazz in France. Hugues Panassié was president and Charles Delaunay secretary, but in 1936 Louis Armstrong was elected Honorary President of the club and held that title until his death in 1971.

With the help of the Hot Club, jazz took root in post-war France. Although they appreciated the American jazz groups, the Hot Club was on the lookout for French talent. They “discovered” guitarist Django Reinhardt and violinist Stéphane Grappelli who, along with others, became known as the Hot Club Quintet, the first “all French” jazz band.

Jazz during the occupation
When the Second World War was declared, most of the African American jazz musicians left France and the French bands were worried. Hitler wasn’t a jazz fan. He considered it a tool of the Jews and detrimental to society.

But, Hitler was more tolerant in France than in other countries. He wanted to remain on good terms with the French and use their resources for his war effort. He also planned to make Paris a recreation centre for his troops so he encouraged the entertainment industry there. Foreign tunes were absolutely forbidden but he allowed traditional music, thinking his propaganda would be better accepted if it was broadcast along with popular songs.

“Frenchified” jazz
The Hot Club took advantage of this situation and set about creating a “French history” for jazz, proclaiming it a traditional French form of music. They held conferences explaining how jazz was directly inspired by Debussy, an influential French composer of the late 19th and early 20th centuries, and circulated flyers detailing this invented pedigree.

They wrote books to convince Hitler and the Vichy regime of the merits of French jazz. One music critic published a book explaining how it was intrinsically French and how it could become the new European music under the Nazi regime. Hugues Panassié, president of the Hot Club, published a book addressing the Vichy regime’s argument that jazz couldn’t carry a patriotic message. In his book he claimed that jazz had simply been misunderstood and he scattered biblical passages and political quotes throughout to make it sound convincing.

It’s not swing, it’s jazz
Music experts pointed out that the jazz musicians of the time were all French (the American musicians had left at the start of the war) and they made “adjustments” to make jazz seem more French. At the time the music was called “swing” in France so they started calling it “jazz” which sounded less American.

It’s not blues, it’s tristesse
The titles of songs were changed to French: “St. Louis Blues” became “Tristesse de St. Louis” and “I Got Rhythm” became “Agate Rhythm”. The names of composers were either left off or changed. Louis Armstrong’s songs were credited to Jean Sablon during that time. When they had finished, jazz looked as French as baguettes and brie. Their efforts paid off when the Nazis banned subversive “American swing” but permitted traditional “French jazz”.  Of course, it was the same music, just cleverly repackaged.

Jazz and the Resistance
Hot Club members weren’t just defying the Nazis with music, many of them were active members of the Resistance. They used jazz concerts and conferences as cover to pass information to England. In 1943 the Hot Club headquarters in Paris was raided and some of its officials were arrested. Delaunay, Hot Club secretary, was released after one month, but several of the others perished in Nazi concentration camps.

However, jazz survived and kept the French company during the occupation. And when the war was over, France remained faithful to the music that, by that time, really had become woven into French culture.

History of the Nice Jazz Festival: