Happy May Day! Give a Flower to Someone You Love 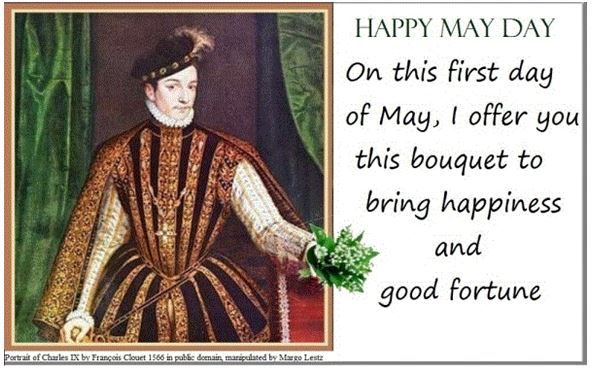 May 1st is a public holiday in France, “La Fête du Travail”, which is the equivalent of Labour Day.  But it is also another special day, “La Fête du Muguet” (pronounced something like “mew-gay”), the flower known in English as lily of the valley.  Each May 1st we offer a sprig of these perfumed nodding bells to those we love, our family and friends. 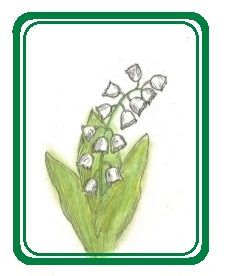 It all started with Charlie 9

Where did this delightful tradition originate?  Well, we can trace this expression of love back to the middle ages and to a king who was known for one of the bloodiest religious massacres in France’s history.  Charles IX, the king who ordered the St. Bartholomew’s Day Massacre, in which thousands of Protestants were murdered.

Oh, but surely he must have had a kinder and gentler side. Let’s go back to when little Charlie was 9 years old and much nicer.  It was 1560 and it was customary in the French countryside to give a sprig or branch of some kind of flower on the first day of May to chase away the curse of winter and as a wish for a fortunate and happy new season.  That year, young Charlie was on a visit in the Drome (an area about 200 kilometres or 125 miles northwest of Nice) when he was presented with a sprig of lily of the valley. He was delighted by the gesture and the fragrant flowers that hung like little white bells.

The next year on May 1st when Charlie was 10 years old and about to be consecrated as Charles IX, King of France, he decided to give the same charming flower to all of the ladies of the court.  And so the lovely practice of handing out lily of the valley on May 1st took root. 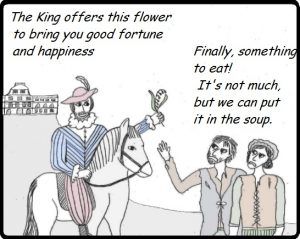 Charlie inherited a kingdom that was devastated by the Wars of Religion, which continued throughout his reign.  Toward the end of his short time on the throne (and his short life – he died at 23), he was moved by compassion to do something for his people who were suffering and hungry.  He thought about it for a few days and then came up with a great idea, just what the people needed to lift their spirits.  On May 1st, he ordered his soldiers to hand out sprigs of lily of the valley on the streets of Paris as a wish of good luck and happiness from their king.

Charlie was sure this symbol of goodwill would cheer up his subjects.  But the people were hungry and they decided to add the flowers to their soup.  Unfortunately, the lily of the valley plant is toxic if eaten and many of Charlie’s subjects died from his eating his gift.

A little help from the Fashion Industry

Even though the flower wasn’t so lucky for Charlie’s subjects, the plant managed to maintain its reputation as bearer of good fortune.  But the tradition of giving it on May 1st was not widespread until the turn of the 20th century, when the fashion designers of Paris revived the practice by presenting all of their female clients and employees with the symbolic flowers on May 1st 1900.  Since then, it has become customary throughout France to give a sprig of lily of the valley on May 1st to those you hold near and dear.

So, if you are in France on May 1st and someone offers you a sprig of lily of the valley – DON’T EAT IT!  Just enjoy the beauty and fragrance and bask in the assurance that you are loved… unless, of course, they tell you that it makes a nice addition to your soup.