May, a Month of Holidays and Festivals in Nice, France 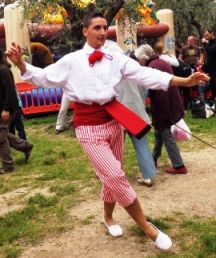 The month of May can be a frustrating time to be in France.  There are 5 public holidays, which makes it difficult to conduct business (like getting all of the paperwork necessary for renting our new apartment).  But it is a nice time to be in Nice if you are not in a hurry to get anything done.  In addition to all of the holidays, every weekend there are festivities to celebrate the coming of springtime.  They are called “le festin des mai” in French or “lu mai” in the Niçoise language.

For centuries these festivities were held in the middle of each neighbourhood.  The central square or crossroad was decorated and became the hub of activity.  But in the early 20th century, the increase in the number of automobiles and traffic meant that this tradition was at risk of being lost.  So to allow the Niçois to continue their celebrations and to not block the traffic every weekend in May, it was decided to have one large festival, in a park on the hill of Cimiez, an area in the north east part of the city.

It makes for a great family day out.  You can pack a picnic lunch or buy food there and eat among the ancient olive trees.  There are activities to keep the children occupied, like bouncy castles, puppet shows, and games.  And there is a nearby monastery with peaceful, flower filled gardens to be explored.

The food is simple and mostly the Niçois specialities listed here.

Socca – a flat bread made of chick pea flour (as seen in the round flat pans in the photo below).

Pan-bagnat – basically a niçoise salade on a big bun. 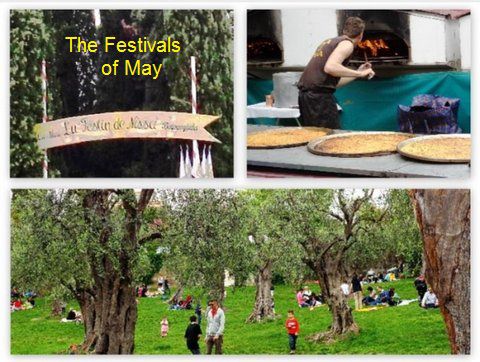 In a tradition that goes back to the time of the Romans, the month of May (and the arrival of Spring) was celebrated by cutting a tree which would be placed in a temple and then decorated with flowers.  This “May tree” became known as a “mai”.  The tradition evolved into putting the tree (or the “mai”) in the centre of each neighbourhood and dancing around it.  Today, instead of cutting down trees every year, we use a tall pole (a maypole) decorated with ribbons. 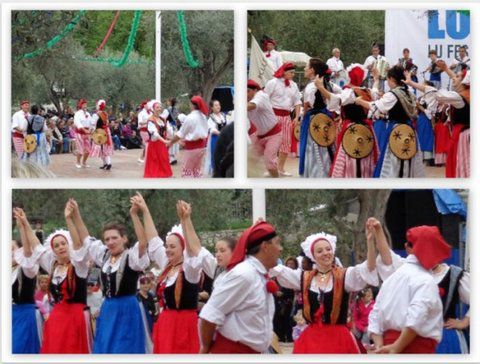 The dance groups started to gain popularity after the Second World War.  To find authentic costume designs, the directors of the groups studied 19th century paintings of the area.  The costumes in these photos are those of fishermen for the men and of flower sellers for the women.  They are colourful and look lovely in the dance.

This year, the celebrations are returning to the neighbourhoods.  In addition to the Sunday activities at Cimiez, there are Saturday events in various areas throughout the city.  With all of the holidays this month, not much will get done, so you might as well relax and celebrate with the locals.