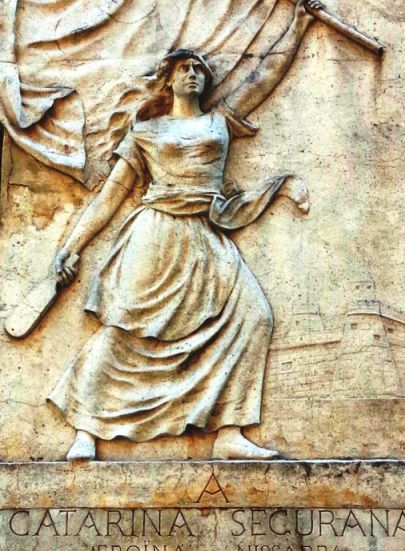 In the 1500s there was a young woman living in Nice by the name of Catherine Ségurane.  Cathy was not considered beautiful neither was she very ladylike.  We might say she was a bit rough around the edges.

She worked as a laundress, which at that time, was very hard work. In all kinds of weather, she would get up at daybreak and start carrying heavy baskets full of laundry down to the Paillon River that flowed just outside the walls of Old Nice.

She would trudge out onto the rocky riverbank with her piled-high baskets, get down on her knees and scrub the clothes on the rocks.  After the washing and rinsing, she would fold the garments then beat them with a big wooden paddle to get out any remaining water.  All of this heavy lifting and laundry beating meant that Cathy built up some pretty impressive muscles – which would come in handy later. 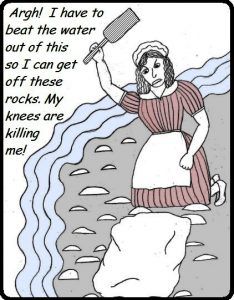 In 1543 the city of Nice consisted of the area we today call, the Old Town.  A tall thick wall with towers placed in strategic locations protected it.  Nice didn’t belong to France or Italy, but the county of Savoy.  It was an important city because of its access to the sea, and the French and Turkish armies joined forces to take it.

On the morning of the 15th of August, 1543 Cathy woke to a terrible situation. There were 150 French and Turkish ships in the bay and they were firing on Nice. Not only this, but there were troops on the ground, attacking the city walls from the back, just by where Cathy lived and worked.

That day every citizen became a soldier and they fought with whatever they had at hand to protect their city. So what did Cathy have?  Her big sturdy laundry paddle and the muscles and courage to use it.  The Turks were climbing up the walls and one of them was making his way up the tower to plant the Turkish flag and claim victory. 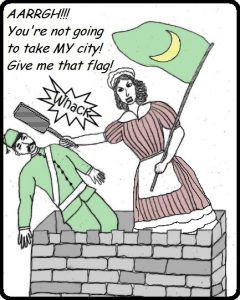 When Cathy saw that crescent-mooned flag going up over her city, she went wild with rage.  She let out a scream that was heard over the cannon fire and she ran straight for that Turk with her laundry paddle. She whacked him in the head and grabbed the flag as he went flying off the tower. She broke the flag pole over her knee then she ripped the fabric to pieces.

Next she did something that was decidedly unladylike. She turned her back to the soldiers below, bent over, lifted up her skirt and showed them a different moon than the one on their flag. Then she took their ripped up flag and wiped her bottom with it before flinging it down on them.  The Turks were horrified by this crazy woman and her desecration of their flag – and they ran.  Cathy had saved the day! 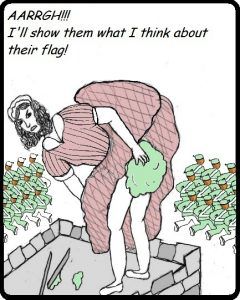 Unfortunately, this didn’t keep them away.  They came back later and occupied the city for a while until reinforcements from Savoy arrived to drive them out.  But Cathy became a heroine and an emblem of the Niçois spirit.  Every year on the 25th of November, which is St. Catherine’s day, there is a little celebration in front of the monument on rue Sincaire where the tower once stood.