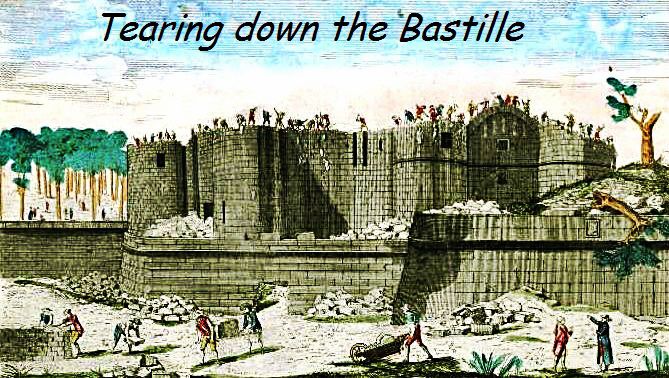 As the French Revolution started, one man recognised and grasped his opportunity to do something important.  Then he used his creative marketing skills to complete the task.

Storming of the Bastille
On July 14, 1789, the Parisians were fed up with the inequalities in their society and decided to do something about it.  They decided to revolt.   A mob formed and their first stop was the Bastille, a prison which had become a symbol of tyranny and oppression. It also contained the gunpowder they needed to start their revolution. So they stormed it.

Pierre sees an opportunity
Among those doing the storming that day was 34 year old Pierre François Palloy (pronounced a bit like pal-wah) who ran a successful Parisian building construction business. After the Bastille was taken, many men climbed onto the towers (in an 18th century victory dance?) Pierre was among them and as he stood at the top of that prison and looked down at the angry crowd, he sensed that this was a historic moment. And he wanted to be a part of it – more accurately, he wanted to be in charge of it.

Pierre takes charge
He started tearing off some of the top stones and encouraging others to do the same. (That’s his version anyway. Others also claim to have taken down the first stone.) But Pierre was a man of action. The next day, he pulled his crew of workmen off all other projects and started the demolition of the Bastille. Other Parisians were also there to do as much damage as they could to that hated symbol.

Pierre asks permission
Then, it occurred to Pierre that he might want to get some kind of authorisation to tear down this monumental building. The following morning (the 16th of July) while his crew was chipping away, he presented himself at City Hall, not only to ask permission to tear down the Bastille, but also to be in charge of the entire project.

The newly-formed Assembly was debating whether the Bastille should be reused or demolished. Pierre presented his case for its demolition and for his appointment as supervisor. He promised his attention to detail, his determination, his dedication and his loyalty. He reminded them of his construction company and he promised to hire only good and patriotic workers. Pierre hung around all day reminding them why he was the best one for the job. 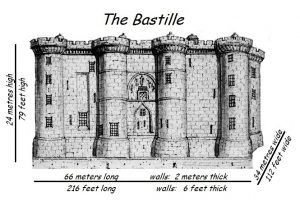 The committee considered the facts: The Bastille was already being torn down and they had a contractor in front of them who wanted to supervise it. They decided the demolition of the Bastille could continue under the direction of Pierre Palloy.

Pierre was thrilled. He considered himself the director of the greatest patriotic project that existed. He had an emblem painted on his carriage depicting the storming of the Bastille and he decorated everything, from his business cards to his account books, with symbols of patriotism. From then on, he signed his name only as “Palloy, Patriote”, taking “Patriot” as his title.

Some of the large stones were used in the construction of the Concorde Bridge, and other building projects around the city. Many Parisians took stones to make repairs to their homes or just as good luck pieces. But all this didn’t even make a dent in the gigantic pile of rubble that the prison produced. It would take some imagination to dispose of it all and luckily, Pierre the Patriot had bucket-loads of that. 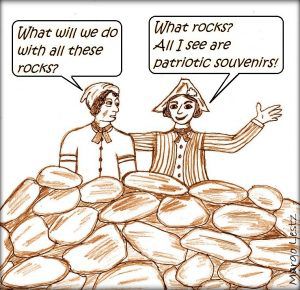 Rocks become souvenirs
Where most saw rubble, Pierre saw… patriotic souvenirs. He would make, sell and give away souvenirs. They would all bear his name, of course, and tell the story of his patriotic endeavour.

He set up a factory on another site he owned in Paris where carving and engraving would be done. His first project was to make 83 models of the Bastille, carved from the prison’s stones. They were given to each of the 83 newly-formed districts. These were not little trinkets to put on the mantle, they were grand representations of a grand project. The models were 1.37 m long by 1.2 m tall (4 ½ ft long by 4 ft high) and were delivered by a group of specially chosen, young, good-looking, patriotic men called “Apostles of Liberty”. Pierre wrote a speech which they had to memorise and then recite at the presentation of the gifts.

Along with the model of the Bastille, the Apostles of Liberty bore other gifts: A paving stone from the dungeon, a plan and description of the building, a ball and chain, a piece of armour found in the prison, and a painting. Each department received three crates of Bastille debris (I mean souvenirs).

Still more rock
Pierre still had a lot of rock as well as iron, wood, marble, etc. He transformed these materials into all kinds of souvenirs, including medallions, statues, snuffboxes, paper weights, candy dishes, inkwells, and jewellery.

These souvenirs were sent all over France, Europe, even to the Americas. Almost every organisation, administration, society, and public figure received their piece of the Bastille. He made medals for his workers to wear and he even made boundary stones to mark the borders of the “Land of Liberty”. 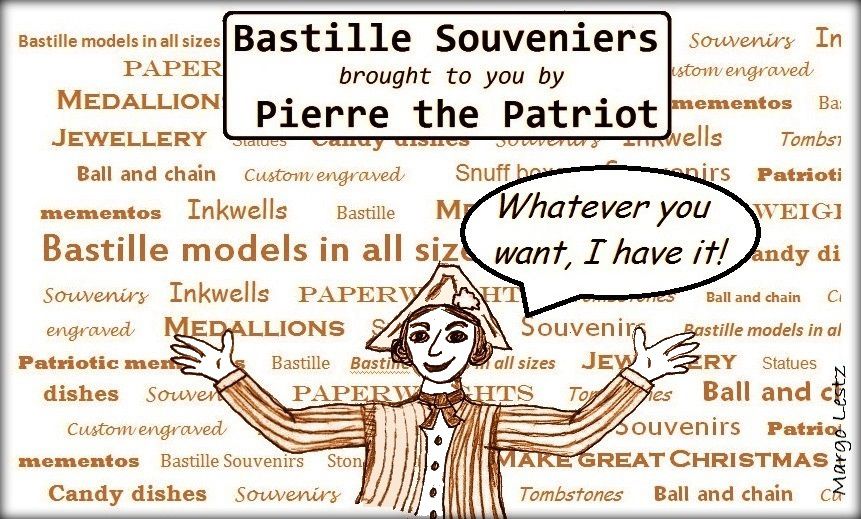 The Bastille is no more
About 2 ½ years later, when the demolition of the Bastille was finished and most of the debris had been repurposed as souvenirs and scattered around the world, Pierre held a ceremony with lots of pomp where he delivered his meticulously kept accounts to the committee. They checked and approved them and everyone went on their merry way.

But a few years later, under a new government, Pierre was arrested and charged with embezzlement. He was held only two months, but while in prison he asked his wife to arrange having one of the stones from the Bastille brought into his cell. He even continued to fill orders for Bastille souvenirs that came in during his short incarceration.

In the end, Pierre’s patriotism was acknowledged.  He was exonerated and in 1814 received the Décoration du Lys award for his patriotic service. It seems only fitting that Pierre, whose name means stone, is remembered for his imaginative methods of scattering stones from the Bastille to every corner of France and beyond.