The Changing Face of the French Republic 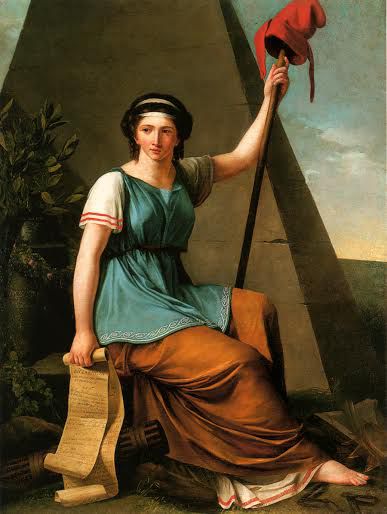 Did you know that France has been led by a woman ever since the French Revolution of 1789? It’s true! My name is Marianne and my image is on official seals and postage stamps, and sculpted busts of me adorn city halls and public buildings throughout the country. Every French person can easily recognise me, but no one can describe exactly what I look like. That’s because I have regular makeovers. After all, I’m the personification of the French Republic, so I have to keep up with the times and always look my best.

Goddess of Liberty
Before I became the symbol of the Republic, though, I was the goddess of Liberty. I wore Roman clothing and held a red Phrygian cap on top of a spear. The Phrygian cap used to be worn in ancient Rome by freed slaves to show their liberated status so it’s an important symbol.

When the Revolution began in 1789, the French people looked to me, and I did my best to inspire them in their struggle for liberty. Later, the Revolutionaries adopted my red cap and it became a symbol of their Revolution.

Representation of the French Republic
After the old order was overthrown, France needed a new form of government and the First French Republic was formed in 1792. Since there was no longer a king, this new government needed a symbol to replace his image on their official seal. They decided to employ me, the goddess of Liberty, to represent their Republic. Of course, I was flattered and immediately accepted.

On the new State seal, I was shown in my traditional pose, wearing Roman attire and holding a red Phrygian cap of liberty atop a spike. On my left, there was a bundle of sticks with an axe attached. This is called a fasces and it’s another emblem from Roman times. It was carried by the magistrate’s body guard and symbolised his power to carry out punishment, either by beating (with the sticks) or by beheading (with the axe). Unfortunately, this was an all too relevant symbol for the bloody times to come. 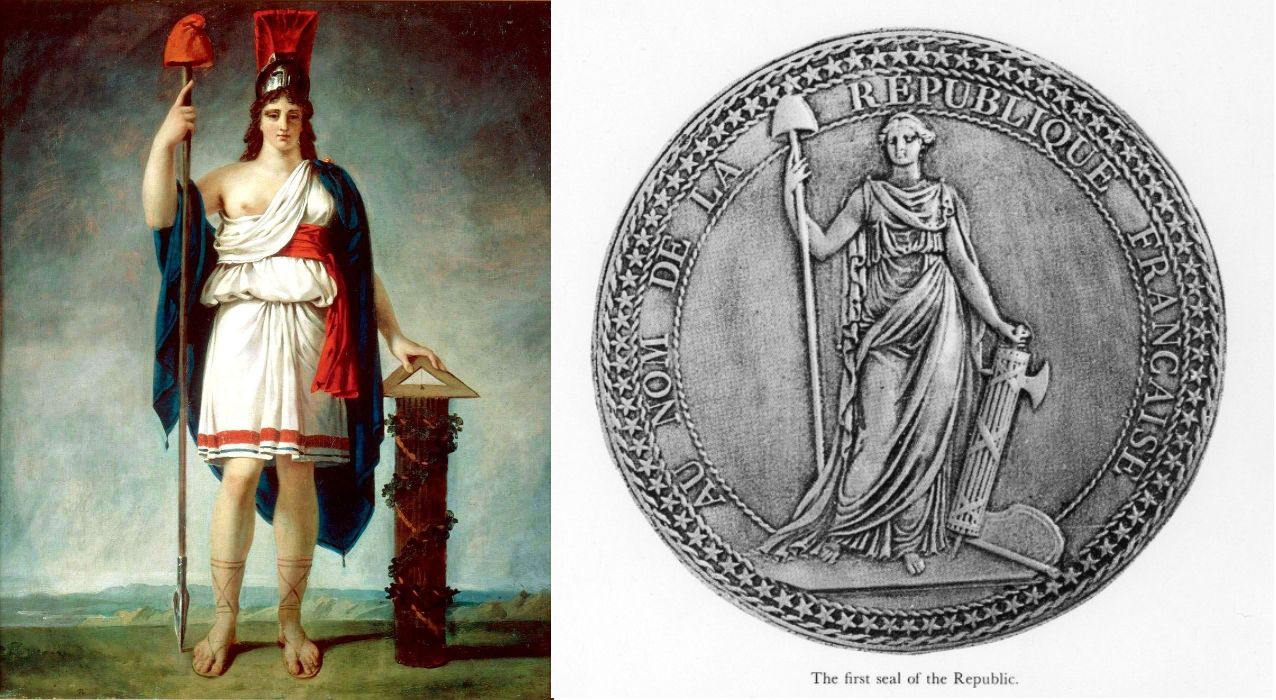 Above you can see me representing the First French Republic in a painting by Antoine-Jean Gros and on the first official State seal.

Every image of the king was replaced by an image of me, the new face of France, and under my picture, the words, “French Republic”. Soon, the people started to call me Marianne. I think it was because Marie, Anne, and Marie-Anne were the most popular names among the common people at that time. I took that name proudly and it made me feel like one of them.

Reign of Terror
The First Republic got off to a very rocky start and was, almost immediately, thrown into that horrible Reign of Terror. Because of political disagreements, an estimated 40,000 of my precious people were executed. Many went by way of the guillotine which, I’m ashamed to say, came to be called the “national razor” of France. Those were terrible days! 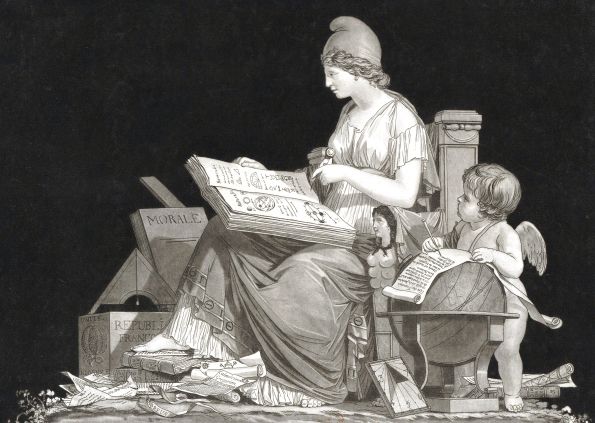 Times were hard and I needed a makeover! I transformed myself from the axe-wielding lady on the seal into a serene motherly figure, in hopes that it would calm and soothe my “children”. On the 1793 calendar, you can see that I started wearing my Phrygian liberty cap. The spear that used to hold it was gone, as were all weapons. I’m calmly reading a book surrounded by symbols of knowledge. I was the model of a Republic longing for liberty, peace, and enlightenment.

Liberty leading the people
That First Republic lasted only twelve years. It came to an end in 1804, when Napoleon Bonaparte became emperor. Since there was no longer a republic, I was no longer needed as its symbol and I went back to being simply a representation of Liberty. It’s a status that I maintained for the next 44 years while France went through an emperor, three kings, and two more revolutions. 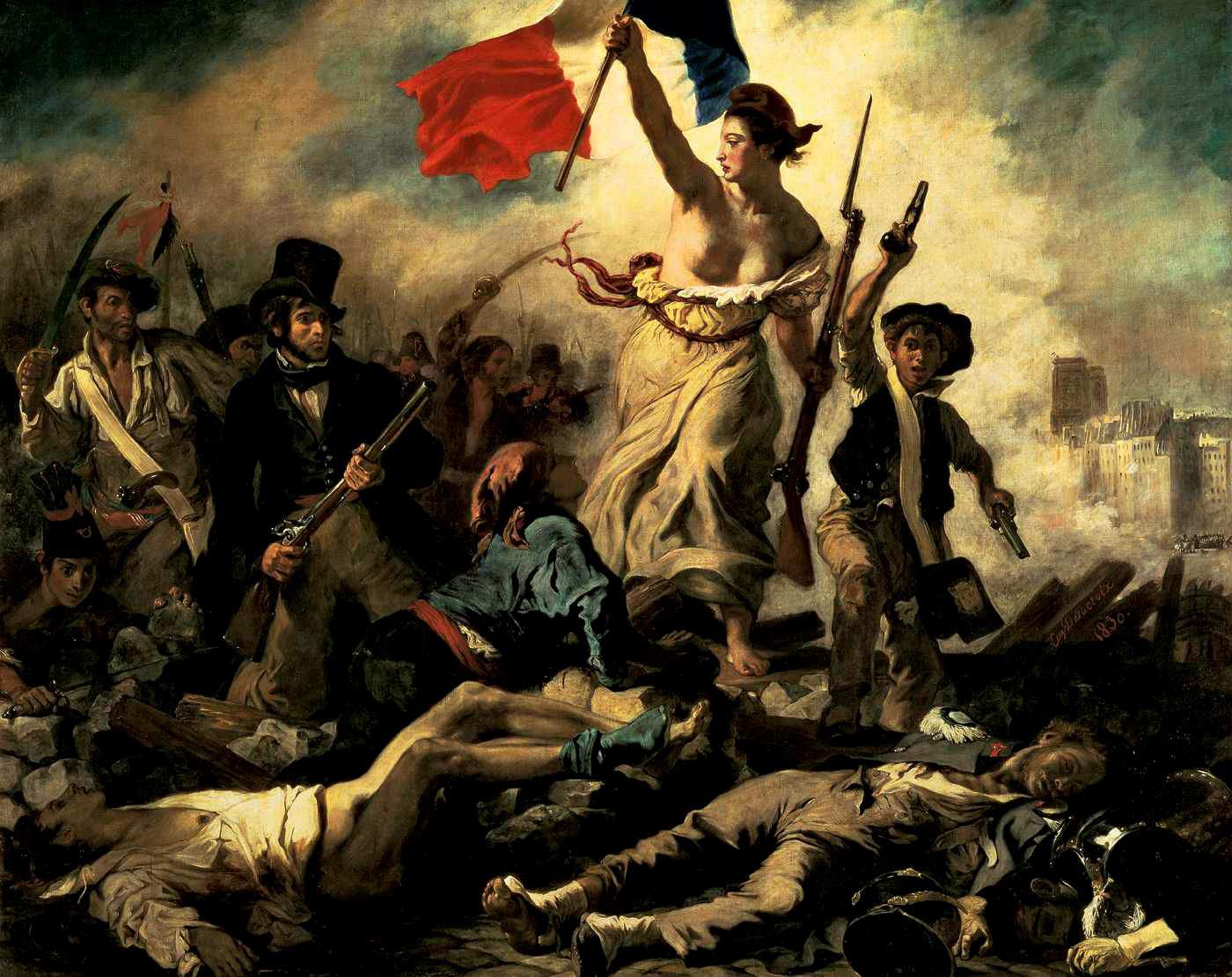 Even though I no longer had a republic to represent, I didn’t abandon the French people and they didn’t forget about me either. Eugène Delacroix featured me in a very well-known painting called, la liberté guidant le peuple. In English that’s, “Liberty leading the people”. As you can see, I had changed my looks again. He painted me as a barefoot, bare-breasted woman – I’m not quite sure why, but I often have trouble keeping my top on. Anyway, I’m holding the French flag and leading a group of fighters during the 1830 revolution. I had left my Roman goddess image behind to become a woman of the people, willing to fight alongside them for liberty.

Undecided on a new look
After the third Revolution in 1848, the French gave the Republic another try and Republic No. 2 was formed. The new government declared that “the image of liberty should replace everywhere the images of corruption and shame…” My status as symbol of the State was restored and now I represented Liberty, the Republic, and the Revolution. As the official symbol of the government, my image would grace statues, money, important documents, etc. However, the powers that were just weren’t sure how they wanted me to look. 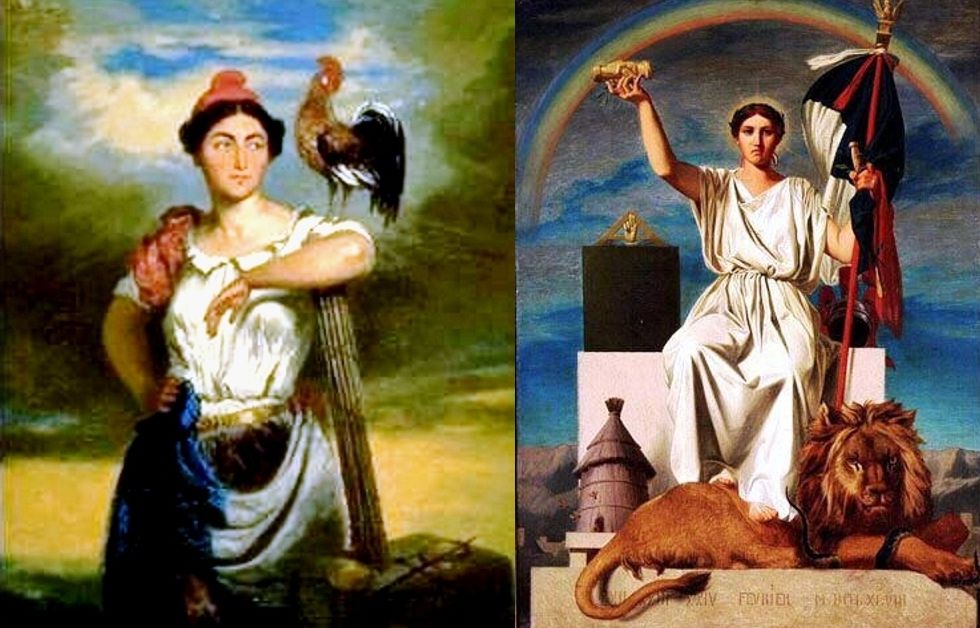 They held a contest to get ideas from different artists. I was to portray the State motto of liberty, equality, and fraternity. There were many lovely illustrations submitted and I liked almost all of them – you can see two very different ones above. The Second Republic had intended to choose one look and standardise my image, but since it only lasted four years, my makeover was a project left unfinished.

Booted-out by another Emperor
You would think the French people would have known better. But no, Louis-Napoleon Bonaparte (Napoleon III) was elected president of the Second Republic. And when it was time for new elections he, like his uncle before him, decided to become emperor. So the Republic fell by the wayside – again, and I lost my status as its symbol – again.

Wearing my cap in city hall
When Napoleon III was captured by the Prussians in 1870, the Third Republic was formed and I was back – this time for good. Busts of me were sculpted and placed all over France to replace those of the former emperor. Republic No. 3 wanted to avoid all symbols of revolt, so they preferred that I wear a crown of leaves or sun rays instead of my Phrygian cap which was now associated with revolution.

However, I liked my red cap and so did the people. In 1880 the Paris city hall ordered a bust of me wearing my Phrygian bonnet. Soon other cities followed and I was again free to wear the head covering that I had grown so fond of. It was, after all, a symbol of liberty, an ideal very close to all our hearts. The capped version of me became the most popular, and today, you’ll see me wearing my liberty bonnet in town halls, schools, and public buildings all over France.

Sadly, the Third Republic ended in 1940 with the German Occupation. I was officially retired from public life, but lived on in the hearts of the French people as their symbol of Liberty.

The Fourth and Fifth Republics followed the liberation of France and the busts of me came out of attics and closets to reclaim their rightful places of honour in town halls and public buildings.

Famous faces
There has never been an official image of me, so artists are free to imagine me as they wish. Likewise, mayors are free to choose the version that suits them to grace their town halls. Historically, representations of me were anonymous; I could have been any daughter of the Republic. But in the 1960s, someone had the idea to sculpt me in the likeness of famous actresses and singers. The first one to pose in my place was Brigitte Bardot in 1968. She was followed by Michèle Morgan, Mireille Mathieu, Catherine Deneuve, Inès de la Fressange, Laetitia Casta, and Sophie Marceau. I certainly can’t complain about being represented by these lovely ladies! 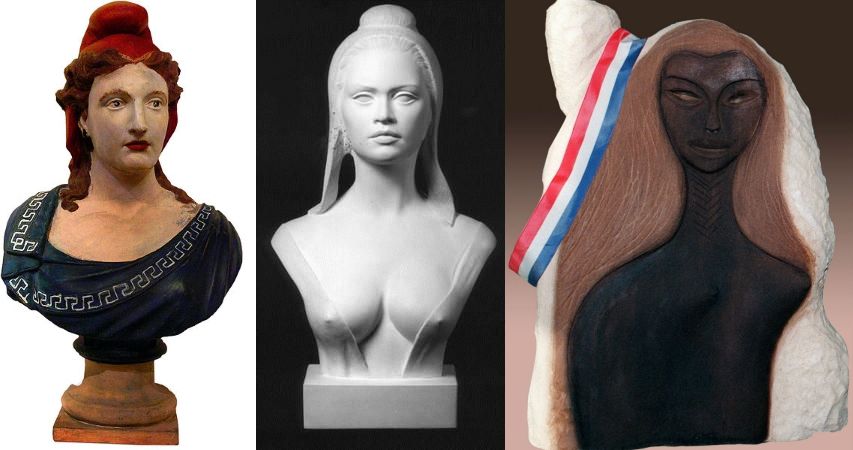 Above you can see a traditional, anonymous me, Brigitte Bardot as me, and a modern and unusual me. Note that in all three, I’m proudly wearing my Phrygian cap of liberty.

Through all their struggles and revolutions I’ve never left the side of my beloved French people. I’ve changed my image from goddess to anonymous woman of the people to famous actress. I’ve taken on the role of fearless warrior, comforting mother and, as long as they’ll have me, I intend to do my best to become whatever the French people need me to be in the future. After all, it does a girl good to have a makeover from time to time.