Florence (Forestier) is a young teacher in a municipal primary school in France. She lives with her ten-year-old son in an apartment in the ground floor of the school. The possibly unhealthy proximity of this work-life situation is shown right at the beginning when Florence opens the door to the hall and gives her son Denis (Cousi) an overdose a of goodbye kisses right in front of his classmates, to his embarrassment. 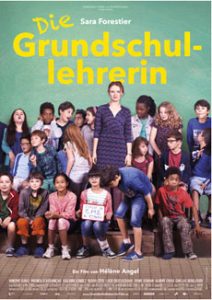 The film has long scenes shot in the classroom, a fictional class composed of children doing a wonderful job of acting like normal fourth-graders. It is clear on the one hand that Florence is a talented and empathetic teacher. On the other hand the precarious emotional foundation of Florence’s life starts to show when one child, Sacha (Bendjoudi), spends some time in the class. It turns out that this boy has been abandoned by his parents. Although she doesn’t know her, Florence identifies instinctively with Sacha’s single mother and projects her own fears and frustrations into the mother’s situation. At the same time she feels attracted to Sacha’s current caregiver Mathieu (Elbaz), an ex-partner of the mother.

Florence is a Muttertier who reacts instinctively and unpredictably to any kind of nest-robbing. When son Denis expresses his wish to live with his father for a while in his building project in Java, Florence deteriorates. And in the middle of her personal crisis Florence faces a teaching exam that will determine her future.

While Forestier’s acting is quite remarkable, I found that the vision of the film gets lost in all the chaos. Florence preaches her own Leitmotif of “be your own hero” to her pupils by having them memorize the opening sentences of David Copperfield . How can a fourth-grader figure that out? Florence stages a mythical re-enactment of the creation of the world, but hasn’t worked out all the details, the rehearsal falls apart, and one autistic child is left insecure. Florence needs to take a hard look at reality and take a leap forward, personally and professionally.

The total impression is of an intense personal drama that may or may not have anything to do with a real primary school classroom in France today. Confusing but interesting. (Ann Gebauer-Thompson)