Die Jones: Spione von nebenan (Keeping up with the Joneses) ***

Jeff Gaffney (Galifianakis) and his wife Karen (Fisher) live in a nice house at the end of the turn-around in a dead-end street. Jeff works in Human Resources in McDowell-Burton International. They are surrounded by other nice houses and soon the one next door has new occupants: Tim Jones (Hamm) and his wife Natalie (Gadot). Naturally, good old American hospitality kicks in; the Joneses introduce themselves as the new neighbors; the Gaffneys invite them in for a drink. Gradually, they spend more time with each other, but real friendship seems to hit a bump. Somehow the Joneses aren’t what they seem to be, which Karen first observes while working at home and looking out the window. It turns out that the neighbors are professional spies (as revealed in the German title of the film) and have their eyes, not only on Jeff, but on everyone in his company. They work with an informer in the company, as well as a bug in the Gaffney home: The so-called neighbors have been listening to every word. 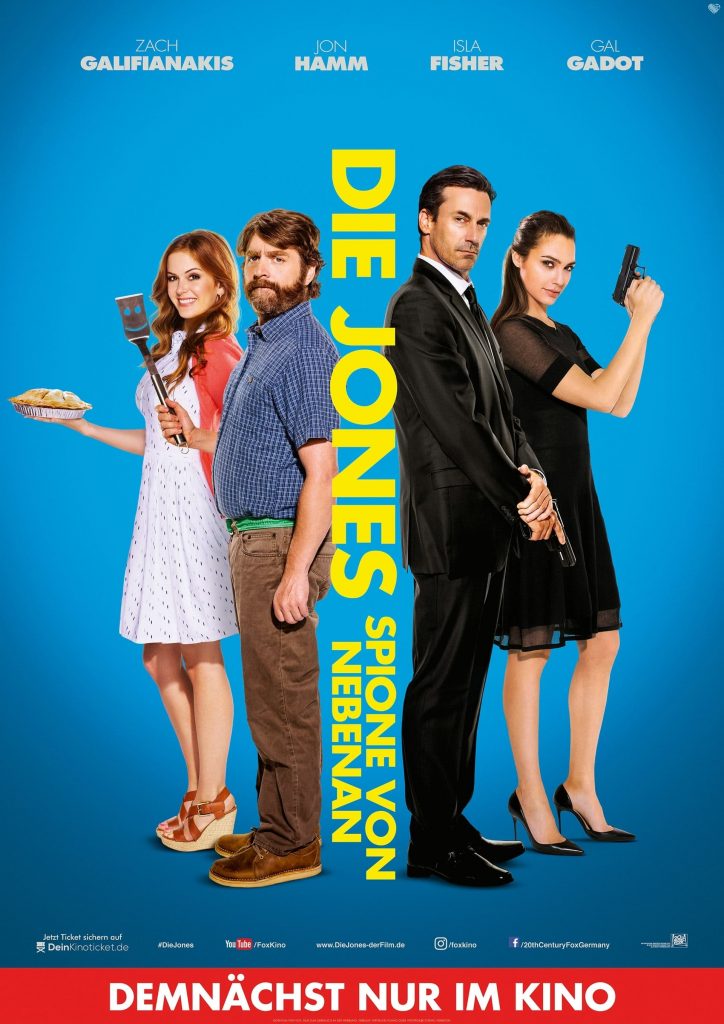 This is a film for a few hours of distraction from daily encumbrances – get away from it all and enjoy the pleasant niceties which escalate to a car chase, a bomb, a death, a fire, struggles for life and death, as well as 17 well-placed songs in the soundtrack. Thank goodness for summer camp, where the two Gaffney children spend the duration of the film. But perhaps they will show up next time; the ending suggests a sequel. Needless to say the title is an idiom in the English language, and refers to one trying to match other people (in this case the Joneses) who set the mark for success. Naturally, the Joneses drive a Mercedes Benz. (Becky Tan)