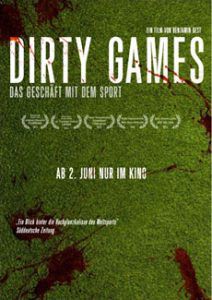 Dirty Games looks at the darker side of sports. Award-winning film maker Benjamin Best looks at how corruption, manipulation and fraud in the sports world affects not only the participants but also the bystanders. From the abused guest workers in Qatar to the Brazilian citizens forced out of their homes to make way for parking lots and hotels, Best gives a voice to not only the victims but also to the guilty involved. We hear from an ex-boxing manager who fixed fights and a former NBA referee. Besides interviews, Best also uses scenes where there is no narration and the pictures tell the story. While bringing across the corruption of the multi-million dollar business of sports, Best also shows that there is still the chance for people to take back some control and return sports to that which “brings people together, … (which) goes beyond social, political and cultural borders.” (Alana Leichert)