Small-time gangster Knock (Sy) jumps onto a cruise ship to escape Lanksy (Elbé), a debt collector. The ship’s captain needed a doctor on board in order to depart and Knock agrees to cooperate with this farce in return for six months’ safety at sea, Knock finds being a physician so satisfactory, that he returns to Marseille to study medicine. Five years later he arrives in the small town of St. Maurice to take over the private practice of retiring Dr. Parpalaid. He soon realizes that everyone shrugs off small illnesses and there is no money in the profession. Luckily, his repressed hoodlum talents come to the fore and he offers free consultation one morning a week. He listens carefully and suggests illnesses which each villager eagerly assumes. He says, “Healthy people are actually sick, but they don’t know it yet.” His career expands parallel to his income and the whole village benefits. They are so engrossed in this doctor that church attendance quickly slumps. Who needs a pastor to tell them how to cope with life, when the doctor is so much more original and caring? The pastor (Lutz) sets out to reveal the truth. By chance Lansky crosses his path and shares facts about Knock’s past. Together they might have a chance to turn the tide. In the meantime Knock has fallen in love with Adele (Girardot) who truly suffers from tuberculosis. 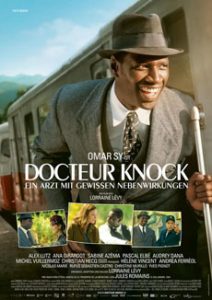 Director Lorraine Lévy based the story on the 1923 play Knock by Jules Romain. This is the fourth filming of the story, which Lévy moves from the original, pre-Nazi, threatening historical background to a lighter, happier 1950s era. There is an atmosphere of manipulation, and willingness to believe what one wants to hear. Besides very talented Omar Sy (well known from Intouchables or in German: Ziemlich beste Freunde), and Alex Lutz as the pastor, there are excellent small roles for villagers: the postman, the pharmacist and his wife, the rich widow, the land owner and her maid, etc. There is a grain of truth in the message: knowledge is power and people love the person who tells them what they want to hear. It’s human nature, exploited not only in medicine or religion. (Becky Tan)