The documentary Eva Hesse takes us through the full progression of Hesse’s art, starting out from her early paintings and ending with her final sculptures experimenting with material such as latex and glass fiber.  Eve Hesse was born in Hamburg, Germany in 1936. When she was three years old, her parents sent her and her older sister to the Netherlands as part of the last Kindertransport, children sent away from Germany to avoid the Nazis. In 1939 her parents moved with Eva and her sister to New York.

Eva’s childhood is not only affected by her time in Europe but also from her mother’s mental illness which ends up with her suicide when Eva was only 10 years old. At the end of the 1950s Eva graduates from art school at Yale and moves back to New York to join the up-and-coming art scene. However, Eva doesn’t find her own style until 1964 when she goes to Germany with her husband, the sculptor Tom Doyle, for a year. During this time she discovers not only her roots but also conquers her nightmares of the past and develops an art style which moves away from painting and drawing into sculpture and experimentation with found and industrial materials.  Returning to the United States, she begins to be known for her post minimalist style and is one of the few female artists at that time to show in prominent exhibitions. 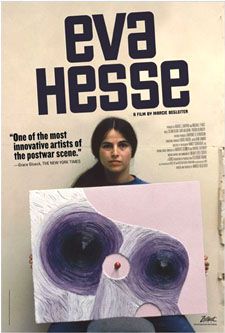 Marcie Begleiter has made an excellent documentary mixing old photographs, journal entries, interviews from contemporary artists and friends as well as illustrations and letters. The film is in German and English with German subtitles. Although the film is long, lasting almost two hours, the fascinating world of Eva Hesse, as a person and artist, keeps the viewer interested and captivated. (Alana Leichert)