It’s been a year since the events of Finding Nemo (2003) when clown fish Marlin crossed an ocean to find his kidnapped son with the help of the forgetful blue tang, Dory. In that time, things have settled back into their normal pattern, but when one day Dory suddenly remembers that she was separated from her parents as a child, she embarks on a journey to find them. Along the way, Dory (Ellen DeGeneres), Marlin (Albert Brooks), and Nemo (Hayden Rolence) all learn the true meaning of family. 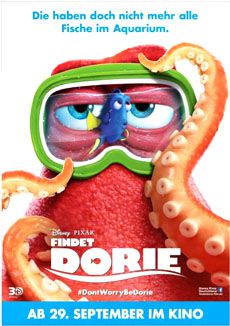 Finding Nemo has long been one of the most popular of Pixar Studios’ films, and so it was not a great shock when a sequel was announced. Unfortunately, Finding Dory does not quite live up to the originality of its predecessor. While the voice acting is still top-notch and the animation continues to impress, the story is beyond weak and much of it feels like a rehash of the first film. Much of the film involves one character being separated from the other two and everyone is on a journey to be reunited, which is essentially the whole plot of the first film. This is often a problem with sequels, and while Finding Dory is certainly not the worst offender, it is beginning to be a worrying trend for a studio known for its strong storytelling that the last three sequels (Monsters University [2013] and Cars 2 [2011]) all suffered in plotting. Perhaps this is a sign that Pixar should return to exclusively making original stories, which has always been its strength, and refrain from sequels which seem to be made exclusively for money grabbing. Unfortunately, three of the four upcoming films planned by the studio will also be sequels, and so it seems to be a trend that doesn’t seem likely to stop anytime soon.  That being said, Finding Dory is still filled with enough enjoyable light-hearted humor to be thoroughly entertaining despite the weakness of the plot and overall story. A highlight is the performance of Ed O’Neill as the grumpy octopus Hank who really shines in a rather underwhelming film. Despite its weaknesses, Finding Dory is sure to find an enthusiastic audience among families, but when compared to the strong, emotional stories of most previous Pixar films, it is unlikely to top anyone’s favorites list. (Rose Finlay)

In their latest animation feature film Finding Dory, the Walt Disney Studios along with the Pixar Animation Enterprise go under-the-sea to catch-up on the life of their beloved Nemo (Finding Nemo), his father Marlin and their happy, comedic friend, Dory. Family, friendship and acceptance of learning disabilities are key themes in the new Disney-Pixar adventure tale. The dynamic-duo animation Studios go above the call of duty to create one of the most beautiful underwater seascapes known among animation professionals. The vibrant coloring of the aquatic sea life and its graceful movements allow the audience to be spell-bound by their beautiful artful design.

Filmmaker Andrew Stanton, chosen to direct Finding Dory says, “I realized that I was worried about Dory, the adorable blue tang fish (in the film Finding Nemo).” He adds, “The idea of her short-term memory loss and how it affected her was unresolved.” He couldn’t shake his curiosity of what might happen to her and if she would survive. This concern allowed the filmmakers an opportunity to answer questions about Dory’s past.

Producer Lindsey Collins adds, “Dory seems so happy, but she was never really grounded until she met Marlin.” Collins continues, “Their happenstance meeting and subsequent friendship marked the first time since she was a kid that she had a family.”

Ellen Degeneres (the voice of Dory) says, “Dory was such a big part of Finding Nemo that it makes sense that people might wonder about her journey (and background story).” And, the reason for her life motto, “Just Keep Swimming!”

Forever grateful to Dory, Marlin and Nemo invited her to live among their community located in the reef area of the ocean. Remembering that Dory suffers from short-term memory loss, Marlin and Nemo longed to help her find her way back home. But, until she could remember something about her past they could do nothing other than be her adopted family. The father and son were convinced that if she felt a part of their family, something would trigger in Dory’s brain to remember her beginnings: her family. Marlin and Nemo were hopeful. Time was not a concern. A recollection was going to happen.

Through a series of events, Dory begins to remember that she once had a family but oddly separated from her parents at a very young age. When Dory was still with her parents they were patiently helping her manage her known short-term memory loss. They didn’t want to change her. They wanted to teach her to how to live a happy life with her disability. Of course, she does not remember this fact.

Dory wonders if her family could still be looking for her after the passing of so much time. Just the thought that her family might have missed her all these years was an exciting idea. Dory’s cheery and lovely self appears even brighter at the thought of finding her family. A happy thought that put her on task to find her beloved mother, Jenny (voice-over actor Diane Keaton) and father, Charlie (voice-over actor Eugene Levy).

Marlin and Nemo accompany Dory on a life-changing adventure that takes them clear across the ocean to California’s prestigious Marine Life Institute (MLI), a rehabilitation center and aquarium. The trio discovers that the Institute is a big complex, cared for and well protected. They need help to get inside of the Institute. Our friendly and lovable Dory asks a few MLI residents to help her and those who agree are: Hank (voice-over of r Ed O’Neill), a feisty octopus who loves to joke around; Bailey (voice-over of Ty Burrell), a beluga whale who feels like his echolocation skills are suffering; and Destiny (voice-over Kaitlin Olson), a nearsighted whale shark who is also one of Dory’s child-hood playmates.

Marlin, Nemo, Hank, Bailey, and Destiny join Dory on one escapade after another looking for Dory’s childhood dwelling and her family that once lived inside the Institute. Their goal to help Dory reconnect with her past and find the family for whom she searches was altered until she remembered to follow the shells. (Karen Pecota)