This is Laurie Anderson’s latest piece of performance art. It is classified as a documentary about her dog Lolabelle but it is actually a journey through Anderson’s reflections on finding love, giving love, dying and letting go. Starting with the fictitious birth of her dog, Anderson moves through her experience of losing several important people in her life. She blends together lessons from the Tibetan Book of the Dead with old 8-mm footage of  herself and siblings as a child and her own modern media, most of which is shown distorted through various filters. 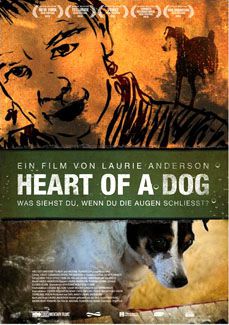 We are taken on a lucid journey of images from New York post 911 to the California coast to a drive through snowy woods. Laurie Anderson’s dreamy and sometimes jarring music plays throughout the film mixed with text that appears on the screen in a stream of consciousness.  Although she doesn’t mention the death of her husband Lou Reed, his presence is constant throughout the film. (Alana Leichert)