Identical twins Lukas and Elias arrive home after a vacation with their father. He leaves them alone in their big old house set among corn fields, a cave, woods, and a lake. Soon their mother arrives from the hospital, where she was recovering from a serious accident; her face is completely bandaged as if she were a robot. Still, she makes an effort to provide a normal life, playing games, eating dinner with them. But is she their real mother? Lukas and Elias begin to doubt any relationship and use cruel, hard means to force the truth. 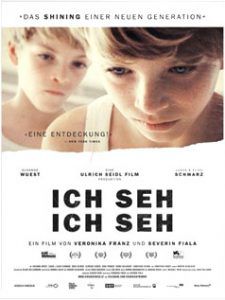 This is a slow horror film brilliantly conveyed by just three actors. They are completely alone, except for a short visit from Red Cross people whom the boys manage to fend off. The father never reappears. They are free to act in this isolated house where blinds are drawn at every window. Together they are stronger than this woman, who, they think, is only pretending to be their mother.

Directors Franz and Fiala said that the film is about masks and surfaces and what is behind them, such as the pictures on the walls, the bandages on the face. Lukas and Elias Schwarz, age 11, were chosen for their roles from 240 pairs of twins, because “they seemed to be the perfect combination of fragility and fearlessness.” (Franz/Fiala) The title is the German version of the children’s game I Spy with my Little Eye (Ich sehe was du nichts siehst und es ist…) After the film my colleagues filled me in with small details which were easily missed, so subtle was the progression. I really must see the film a second time. For example: why are there short takes from the 1965 film The Sound of Music at the beginning and the end? On the other hand there is very little background music throughout, which adds to the suspense much more effectively than crescendos could ever achieve. (Becky Tan)