Father Adam is a modern priest. He jogs long hours, wears a knitted cap and a t-shirt that says ILLINOIS on the front and sports a beard. He runs a home for wayward boys in a small Polish village, as well as ministering to his congregation on Sundays and throughout the week. Michal, the village teacher, also interacts with the boys. Michel, himself, trained for the priesthood until he fell in love with Ewa, whom he married. The boys, Ruda, Gajo, Koko, Babun, and others, don’t always observe the rules and have to be reminded that the alternative is to go back to prison. A village boy Lukasz has a reputation for strangeness; he burnt down a barn and disappeared into the woods for three days. Ewa is a flirt, who seeks a more intimate relationship with Adam; he must avoid her; there must be no scandal. Little does Ewa know, but Adam keeps busy in order to avoid his own sinful desires, as he gradually falls in love with Lukasz. This desire is furthered by the actions of blond newcomer Adrian who seduces Gajo. Adam discovers them naked on the sofa. 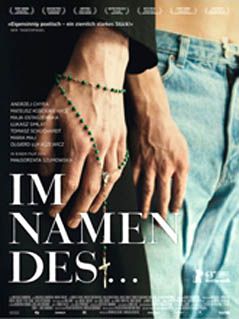 The story unfolds slowly and intensely and is very real. Adam could walk off the screen and you would talk to him about life, although he, actually, has few possibilities for personal communication. He skypes his sister in far-away Toronto, but she refuses to see reality. He fights an inner struggle as a priest in love, in love with a man. This is no priest/pedophile story. Everyone is an adult and it evolves as it must in today’s Poland which is 90% Catholic. But, still, I think you will like the ending. Many people enjoyed this film immensely, awarding it best gay film (Teddy Award) at the 2013 Berlinale, as well as other prizes. It’s interesting that the director is a woman, Malgorzata Szumowska, although few women appear in the film. She says, “I wanted to make a film about a craving for love, about a priest who dares to love.” She accomplished this goal very successfully. (Becky Tan)