Did you ever wonder when a national catastrophe occcurs, how does the government decide who gets compensated and for how much? Director Karin Jurshick has made a very important documentary which looks at the one man who has the courage to step up and make that decision. US attorney Ken Feinberg carries a heavy load on his shoulder; spends sleepless nights listening to classical music while watching football to keep the darkness away from his responsibilities of his day-time job. 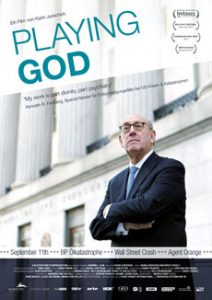 He is one of the most financially powerful men in Washington D.C, who looks at US disasters such as 911, the B.P. oil spill, Hurricane Sandy, and the Agent Orange disaster in Vietnam. This documentary is not only important because we learn about a man who has to play god, but also who gets the money and what rights they waive when they accept that money. Every US citizen should see this film. It will open your eyes on how things really work in D.C. (Shelly Schoeneshoefer)