One hundred seconds after take-off, US Airways Flight 1549 under the command of pilots Captain Chesley “Sully” Sullenberger (Hanks) and First Officer Jeffrey Skiles (Eckhart) are forced to land their Airbus A320 on the frigid Hudson River in January of 2009. Their flying machine carrying 155 passengers collides with a flock of Canada geese at the approximate altitude of 2,800 feet destroying both engines. The immediate loss of power while flying over the city of Manhattan put the pilots into crisis mode. Within seconds, the experienced pilots calculate the safest option for a landing to save lives. 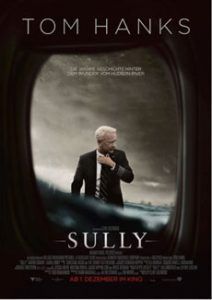 Sullenberger reflects, “The NTSB (National Transportation Safety Board) investigation is the big part of the story that most people don’t know about.” Based on the autobiography Highest Duty by Sullenberger and Skiles, filmmaker Clint Eastwood takes the screenplay from Tom Komarnicki to give the world the truth about the intense investigation in Sully. Eastwood says, “It was a miracle on the Hudson and a good omen in a bad period.” (Karen Pecota)