Ostensibly, the two childhood friends meet to amiably talk about their lives, and fathers. Renowned British-French lawyer Philippe Sands is the catalyst behind these meetings, with David Evans directing. As senior officials in the Third Reich, Hans Frank, General Governor of Poland was considered a prince, while Otto von Wächter, somewhat lower in rank as Governor of Galicia was considered a decent man. Both were among Hitler’s inner circle with their names prominent on documents from that period. In reality, they were deeply involved in the genocidal atrocities perpetrated on Jewish citizens: Hans Frank, i.e. the “butcher of Poland”, and Otto von Wächter whose responsibility was transportation to concentration camps during the Holocaust. 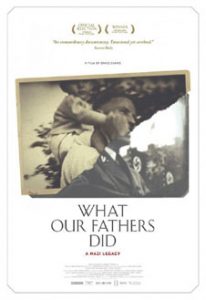 Evans’ brilliantly assembles interviews with Niklas Frank and Horst von Wächter, following Philippe Sands’ sympathetic, impartial treatment; Sands’ familial history is a unifying factor. Traveling to Nazi war crime sites in Poland and the Ukraine includes the site where a majority of Sands’ ancestors perished. The incongruence between the men is palpable, sometimes disturbing, yet moving; democracy seems to hang-in-the-balance during these intense discussions. Whereas Niklas’ disgust, contempt is honest and scathing, Horst chooses to ignore obvious facts. He clings to believing his father would have been exonerated, had he been tried. Hans Frank, on the other hand, carries a photo taken of his father following the conclusion of the Nuremberg trial as a reminder. Sands admit his judicial background was important toward guiding their conversations. Niklas and Horst’s outlooks and perceptions categorically alter before the film ends.

Not-seen-before photos from Frank and von Wächter’s personal family albums, some including Hitler, are shown in What Our Fathers Did: A Nazi Legacy. Settings determine camerawork (Philipp Blaubach, Matt Gray, Sam Hardy) when the two, then three men are together: cinéma vérité at location sites, with a mixture of interior angles, and never rushed. Stitching together interviews and archival footage David Charap’s timing is measured, respectful, laudable, just as Malcolm Lindsay’s music is astute. More than once as facts are presented von Wächter stymies audiences’ patience; he is not to be swayed from his opinion. First screened at Filmfest Hamburg 2015, this documentary’s impact stayed with me. Its emblematic message is poignantly forceful; it is captivating, and frightening considering current political affairs. 96 minutes (Marinell Haegelin)