Woody Allen’s period drama brings viewers weirdly right back to the childhood home of Alvy Singer, the narrator of his 1977 hit Annie Hall. In Wonder Wheel, Ginny (Winslet) is a failed actress in 1950s Coney Island, living in an apartment directly across from the park’s giant ferris wheel with her husband Humpty (Belushi), a carousel operator. Nearing forty, Ginny’s old dreams of fame and fortune have been snuffed out, and she shuffles wearily, with a constant headache, between a job waiting tables at a clam bar and trying to keep her husband off the booze at home. 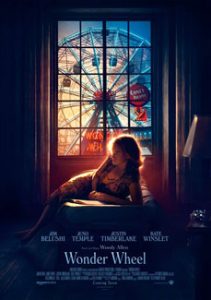 Frustrated with her life and marriage, Ginny ignites a summer romance with Mickey, a handsome young lifeguard and self-styled romantic (Timberlake). But she soon finds herself competing for Mickey’s affections with Humpty’s estranged daughter, who turns up in Brooklyn on the run from her gangster husband. The tangled plot gets darker and darker as the film proceeds. As if the drama weren’t enough, Ginny’s son from a previous marriage lights random fires in the neighborhood inbetween other scenes. Other than those fires, it’s mostly a confusing collage of wild outbreaks of emotion, mostly from Ginny, whose unraveling leads to the tragic Shakespearean moment that’s come to be expected at the end of any Woody Allen film. The good news: If you can’t quite keep track of what’s going on throughout the film, you can just get lost in the cinematography. Vittorio Storaro seems to have gotten a lot of creative license; juxtaposing light and dark, vibrant and dull colors onto members of the cast and Coney Island itself adds an expressionistic touch that might be the film’s salvation. (Deborah Steinborn)