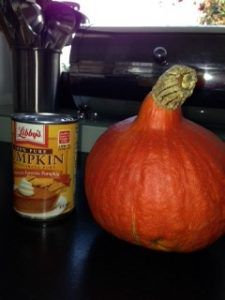 Growing up in Minnesota, a pumpkin was either a big round orange thing that you carved out at Halloween into a scary Jack O’ Lantern or it was found in a can for making pumpkin pie.  I’ll bet scores of expat Americans have already arranged for their canned pumpkin stock in advance of Thanksgiving. There were probably some pretty heavy suitcases over the summer, schlepping cans of this and containers of that.

I was caught empty-handed some Thanksgivings ago, no canned pumpkin in sight.  First, I tried cooking with those pumpkins that are only made for carving.  Luckily this tradition somehow made it to Germany, but oops, not great eating pumpkins.  Only lookers.  Didn’t work so well.  Then I discovered Hokkaido Pumpkin (Hokkaido Kürbis in German) and this was the ticket.  They are small pumpkins, cook well, have a great texture and taste and are easily available at supermarkets and farmers markets.

If I am making a pumpkin soup, I just cut up the Hokkaido in quarters and roast in the oven until fairly tender.  I then cut it in pieces and simmer in a little milk to get it softer, add chicken broth, wine, ground cinnamon, cloves, nutmeg, salt & pepper and puree it for a delicious taste of Autumn – fresh pumpkin soup.  If making a pumpkin risotto, I put raw small chunks of pumpkin in milk to simmer until soft and then go on with the classic risotto, alternating wine and chicken broth, adding spices and parmesan at the end, and a dash of cream.  Come to think of it, I probably add a dash of thick cream to the soup as well, which makes it taste so lovely and creamy, and no doubt contributes happily to my cholesterol.

If any of you have great pumpkin recipes or experiences, would love to hear your stories or cooking tips.  This could become a real pumpkin recipe exchange for all of us pumpkin lovers!