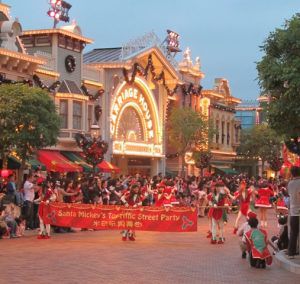 Christmas time (along with Halloween)  is one of the best times to visit Hong Kong Disneyland.  True, the weather is tends to be wetter (and a bit colder)  and the days are shorter,  but there are so many other positives that these little inconveniences seem minor.   Before I go into detail about what is great about a Hong Kong Disneyland Christmas, I wanted to say a little more about the weather and timing.  Although we think of November and December as cloudy and wet, these months historically have less recorded rainfall than any other month, with the exception of January. That being said, there is less sunshine during these months as well.  And this is not necessarily a bad thing, as long as it’s not raining….and at night, it doesn’t matter anyway.  I strongly encourage you to visit at night during Christmas, but I will get into that later.  The temperatures in Hong Kong can range from between 16 °C as a low and 24 °C  as a high during November and December.  (That’s 61 low and 75 high for all of you used to using Fahrenheit).  So, when have been asked by a few people whether or not the winter weather (e.g. clouds and rain)  in Hong makes a Disney trip impractical with kids.  The answer is an overwhelming “No”!  But enough of the geeky weather stuff.  What you really want to know is what makes Christmas time at Hong Kong Disneyland special.  In short, there are three reasons: fantastic atmosphere, fewer people and guaranteed snow.

Holiday Ambience:  On the atmosphere side, Hong Kong Disneyland, like all Disneylands,  goes to great lengths to decorate for Christmas.  Of course, Main Street U.S.A will be decked out for the holidays with lights, trees and shops filled to the rafters with holiday bacchanalia…but it doesn’t stop there.  While Hong Kong Disney has not dedicated any of its particular lands as “Christmasland”, it does do a great job of decorating for the holidays across the park.  They also have the added bonus of Fantasy Garden’s, where one can meet up with the characters.  There are also Christmas meals offered at several of the restaurants and some of the vendors have been renamed “Christmas Markets”.   You will also find elves wandering around on Main Street who are happy to take photos with you and your little ones…even if your darlings are not exactly free of sticky hands.  Every night there is also a holiday parade AND a tree lighting ceremony complete with its own fireworks.  This last bit never fails to thrill my youngest…much more so than the big finale fireworks at the end of the night.  I am not sure why but it make things easier as we can often leave the park before said fireworks and avoid the stampede to the parking lot and taxi line.

Escape from the Teeming Hordes: Speaking of stampedes,  one would expect the Christmas season to be an extremely busy time of the year here, but here in Hong Kong Disney it is not necessarily the case.  Of course,  you can be assured to be in the middle of a lemming like throng if you choose to visit during the two week period before Christmas, but the Christmas season starts much earlier than that here.   The Christmas decorations go up in the early part of November and stay up until the first week of January.  The good news is that the crowds are really thin from November until mid December.  So, if you can manage to wean yourself off of the notion of visiting right at Christmas time, you can avoid the endless lines and have a holiday experience that is about as close to stress free as you can get.

A White Christmas Guarantee:  There is something inherently charming about snow at Christmas.  Maybe it is a part of the collective unconscious but it just makes you feel good.  The problem is that mother nature is not all that predictable.  But when has a little thing like mother nature ever stopped Disney?  So, they have managed to produce “snow” on Main Street U.S.A. everyday during the entire Christmas season.  In fact, they do this several times a day.   And as real snow is messy, cold and wet, they have opted for dry, tidy artificial snow.  While some adults might feel a bit jaded about snow that seems to be made from soap, kids don’t care.  They adore it!! And as an adult, if you can’t suspend disbelief long enough to enjoy this, then you really need to loosen up!!

In the end, the Christmas Holiday season is a magical time.  And Disney is all about the magic.  So this makes for a beautiful experience for knowledgeable visitors!