A “Staycation” at The Hong Kong Disneyland Hotel : 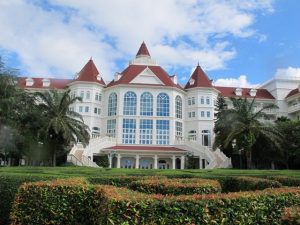 I’m going to be up front and say that I unabashedly LOVE this hotel.   And why do I love it?  Let me count the ways.

Cost:  This is one of the few spots in the world where you can stay at the top of the line Disney hotel and NOT have it cost the equivalent of your child’s college tuition.   As I said before, to benchmark this for you, if you want to stay at the Disneyland Hotel in Paris, the CHEAPEST you can do this is roughly 699 EUROS PER NIGHT!!  To stay in the Grand Floridian at Walt Disney World during the low season will cost you somewhere in the neighborhood of 500 U.S. dollars per night for their “cheap” room.    However, at Disneyland Hotel at Hong Kong Disneyland the cheapest room during the cheapest season only costs HKD $ 2100 per night.  This translates to 270 U.S. dollars, or 206 Euros.    So you can stay at this hotel for half the price of the U.S. equivalent, and a third the price of the Paris equivalent.   They even nicely lay out the costs for you, which are as follows

If you compare this to the “top of the line” hotel at any other Disneyland, it is really a bargain.   Of course, there will be those of you who say that this hotel is “not as” something as the other top of the line hotels.  My response to that is “how much opulence do you REALLY need?!?”  If you are a non parent looking for a luxury hotel where people throw rose petals in front of you as you walk through the door, try the Four Seasons, the Mandarin Oriental, or the Shangri La.  But if you are going to Disney with kids, you really don’t need much more than this…see below for the reasons why. 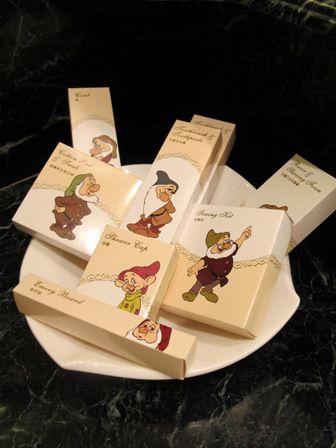 The Rooms:  The HK Disneyland Hotel caters to kids, in many ways both big and small.  Starting with the rooms, which are large enough to accommodate a family of 4 with ease.  There are lots of little Disney touches, like toothbrushes, nail files etc in the bathrooms, all packaged with Disney character designs.  There are kid sized robes and slippers.  The bathrooms are also large enough for 2 kids to shower easily without making it look like Poseidon has made a visit after the fact.   Many of the rooms also have balconies, which I was very unsure of, but the railing are very very high.  So there is little to no chance of your youngster getting an early introduction into extreme sports.   Overall, it is a very comfortable room.  My only complaint would be the lack of choice on the television, but that is a minor consideration with all the other activities available.

Activities:  Even if you are not staying at the Kingdom Club Level (see Before You Go section of my upcoming app), there is a virtual cornucopia of activities for kids at the HK Disneyland Hotel.    So let’s start with an obvious one…the pool.  The pool here is very well designed, with a zero entry area as well as a very decent water slide.  The life guards always seem to be on the ball, unlike other hotels in Hong Kong where we have stayed, and there are even little cabana tents on one side of the pool if you want some privacy.   Another plus here is that there is a snack bar that delivers food and drink pool side.  What I found interesting is that the menu is pretty much exactly the same as the menu at Walt’s Cafe, but without the breakable stemware.  You gotta love that if you have young kids, particularly young boys!!   So, we have eaten most of our meals here.  And speaking of eating, the Enchanted Garden Restaurant is located at this hotel and is the ONLY restaurant on Disney premises that has regular & daily character meals.  They aren’t cheap, but it’s worth it for the experience.  But I digress. 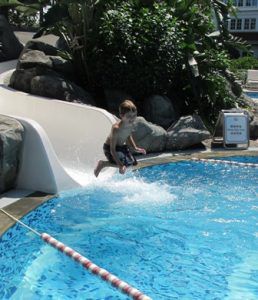 Another outdoor activity is the Mickey maze.  Honestly, I have mixed feeling about this one…about mazes in general.  Any activity in which the sole purpose is to lose my children just doesn’t make me super comfortable.  Maybe in comes from formative years spent in big scary U.S. cities, or maybe I just have a chemical imbalance, but I tend to shy away from activities that result in me feeling like I am in a game of reverse Ms. Pacman.   But for some people, including my husband, this is a great way to run off steam with the kids.  I swear the man could be optimistic in the face of the bubonic plague, but I guess that balances our couple nicely.

Even on rainy days, there is much to do at the Disneyland Hotel.  For one, there is a Storybook Playroom, which is located on the lower levels and even has its own private elevator entrance, surrounded by enough gold and glitter to fit nicely at  Versailles.  It is open most of the day and offers activities such as creating/ torturing towel animals, crafting photo frames, drawing, making holiday aprons or even doing handprints or cookies.  None of this is complementary but the fee is only HK $100, so it is not much of a drain on the pocketbook.  They also show movies just in case your kids just want to zone out.  The bad news is that if your child is under 6, you must accompany them.  If your child is between 6 and 12, you can pay for a “buddy” to supervise them.   Over 12, I guess they figure the kids can hold their own. 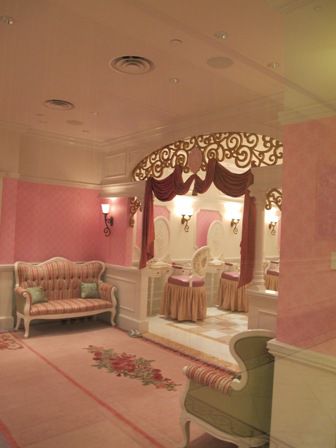 If you happen to have a little girl, you are destined to be sucked into the vortex that is the Bibbidi Bobbidi Boutique.  This is a brilliant marketing idea on Disney’s part.  It is basically a beauty salon for little girls to turn them into Princesses.  It includes costumes, nails, hair styling, makeup and, of course, photo ops.  It is also really nicely set up.  Hell, if they had adult sizes, I might have been tempted to do it.  The down side is there are no boy costumes…but then again most boys would consider this a form of extreme torture, so perhaps there is a reason.   But if you have girls, go ahead and budget for this.  It isn’t cheap, but you are likely to have no choice if your little Princess comes within eye shot of it.

In addition to all of the above, there are characters that show up in the lobby and there is a gift shop that you will also be unlikely to be able to avoid.     And I haven’t even mentioned the Kingdom Club activities, as I have alluded to them in another section.

Despite, and perhaps, because of all of these kid activities, this makes for a very relaxing adult vacation experience.  This hotel really is a destination in and of itself.  About 2/3 of the times we stayed here, the boys had no desire to leave or even see the park.  They swam.  They played at the kids club.  And my husband and I relaxed.

Are there downsides?  Of course.  Not everyone speaks English perfectly.  So, sometimes it can be a bit hard to find things because of this.  It took me about 30 minutes to find the aforementioned Storybook Playroom, after asking about 6 different people.  Are the staff of the “over the top” friendly perky model of Disney behavior that you find in the U.S?  Not usually, but they ARE friendly, albeit in a bit more of a reserved fashion.  This is a cultural thing.  And honestly, sometimes it’s nice to get a break from “Have a Magical Day” sung at the top of someone’s lungs every time you turn a corner.   This sort of thing makes introverts twitch.  But if cultural differences and minor annoyances like those mentioned above wind you up, then you should never leave your home country…and least not without anti-anxiety meds.

So, my advice is to stay at this hotel, even if you already live in Hong Kong.  It’s a fantastic “staycation”, with or without including the park.