Originally posted on finefooddude.com and reproduced with permission:

“In prison, dinner was always a big thing. We had a pasta course, then we had a meat or a fish. Paulie was doing a year for contempt and had a wonderful system for garlic. He used a razor and sliced it so thin it would liquefy in the pan with a little oil. It’s a very good system. Vinnie was in charge of the tomato sauce.”

The prison feast in Goodfellas, Scorsese’s classic depiction of the rise and fall of New York mobsters, is an iconic movie food scene. You want the recipe, to cook exactly what they ate? No problem. Other scenes where food plays a supporting role includes one where a wiseguy is found dead, frozen and hung from a hook in a meat truck alongside some decent-looking pork belly. Whacked after the 1978 Lufthansa gold heist at JFK, the wiseguy’s name? Frankie Carbone.

Now Carbone is a pretty common Italian surname, so it’s just a coincidence that it’s also the name of a new restaurant in LKF tower on Wyndham Street. The 9th floor eatery is the Hong Kong incarnation of Carbone New York, a supper club which took the city by storm, winning critical acclaim and a Michelin star only a few months after opening last year. Their head chef Mario Carbone is only 34 but has worked under some of the biggest names in American cuisine, from Mario Batali to Daniel Boulud. He clearly listened and learned well, as the first Asia outpost of the Carbone name is one of the most exciting additions to the Hong Kong restaurant scene in a long time. You want a celebrity chef, foams and smears on your plate? Fuggedaboutit. This is just absolutely knockout food, simple, classic Italian dishes, beautifully-executed.

Of course the holy grail in running successful restaurants comes from the combination of top-drawer food with something much more difficult and elusive, namely atmosphere. From the moment you walk out of the elevators, Carbone hits you in the face with it, in the best possible way. The warmest of welcomes comes from elegant and beautifully-dressed greeters, before they usher you through the door into Carbone itself.

My immediate reaction was similar to when I walked into New York’s Minetta Tavern. The thing is, The Tavern has been open since 1937 – Carbone has been open two years. It’s a brilliant rendition of New York circa 1955. Beautiful black and white mosaic tile floor, red curtains, wood paneling, flawless white tablecloths, subtle scalloped lighting, an impressive central bar.Then your eye catches the art, curated by Vito Schnabel, meaning there are some seriously heavyweight pieces on display, from Francesco Clemente to Rene Ricard.

Somehow we had lucked out with the corner spot, known as The Godfather Table, giving an uninterrupted view across the room and all the other diners. If you’d like the table number, just tweet me. Next you see the staff, immaculately suited. Louie Carbone, Mario’s cousin, is running the place, the ultimate host in a sensational burgundy tux by Zac Posen. He’s the real deal, so it’s not surprising they talked him out of (very) early retirement to come to Hong Kong. Italian-American to the core, he is one key reason why I think this will be one of the hottest restaurants of 2014.

But anyway, to the food. In common with Carbone NY, things kick off with complimentary garlic and chilli bread, some great prosciutto and a couple knobbly nuggets of Parmigiano Reggiano. Perfect as we sip on our Montepulciano and peruse the short menu.

Now I wouldn’t normally order a salad in a restaurant, except that I’d done my homework and read that those at Carbone were pretty special. Hail Caesar indeed. Louie wheeled over a trolley and constructed it tableside in a large wooden bowl, mixing the home made dressing, seasoning, adding the stunning chunks of herbed bread (like a panzanella), the anchovies and copious shavings of Pecorino. Bada bing, bada boom. Too good. Just too good.

Likewise for my wife’s Caprese, no motley fridge-cold tomatoes with lifeless mozzarella. Hell no. A perfect selection of three types of tomatoes, basil, olive oil, seasoning and, in a final flourish, the home made stracciatella spooned over the top:

Oh my. Another starter of pancetta bought a whole pan of sliced pork belly with sweet balsamic caramelized onions and a few token greens. Bang on, again. After such generous starters, for the main event we passed on the fantastic-looking pesci e carni and went for a fettucine con funghi and Mario’s meatballs. Once again, exactly what you would have hoped for. The meatballs were three pork beauties bathing happily in a great tomato sauce that would make Mario’s Nonna proud.

The restaurant is by now full and pretty rocking for what is only week two, Frankie and Buddy, James Brown and friends serenading us. Further temptation is thrust upon us in glorious Technicolor, a choice of desserts including lemon cheesecake, carrot cake and bananes flambées. Well, when in Rome and all that. Cheesecake was a towering citrus beauty while the bananas went up in a flash of culinary theatre, Louie flambéeing them tableside in a boozy sweet sauce before spooning them over banana bread and adding home made gelato. 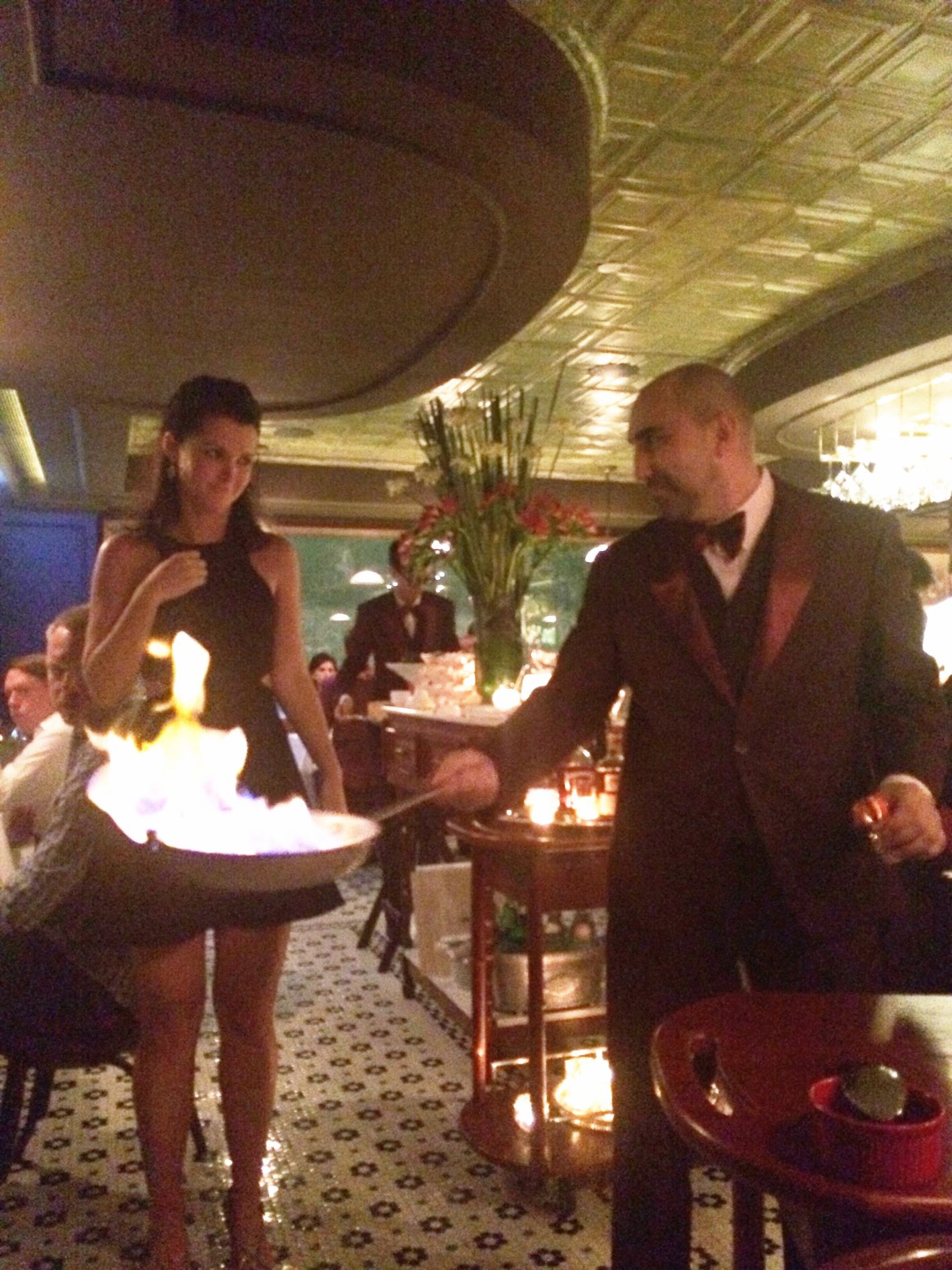 Bottles of home made limoncello and a fig and fennel grappa appear and are left on the table, followed by more freebies in the form of Japanese grapes and a bowl of nuts – PB&J, Carbone style. It’s precisely this sort of hospitality that made Carbone in NY such a success and it’s bound to win fans in a city which loves a freebie arguably more than any other.

So it ends where we began, with Goodfellas. At the end of the movie, his mobster career over and his life changed forever, Henry Hill laments: “Right after I got here, I ordered some spaghetti with marinara sauce and I got egg noodles and ketchup. I’m an average nobody. I get to live the rest of my life like a schnook.”

There’s no chance of that happening at Carbone.

Find Carbone in our Restaurant Directory