The studio’s films such as Spirited Away, Howl’s Moving Castle or even My Neighbor Totoro all have unique and magical universes, with a very particular atmosphere. Have you ever dreamed of wandering through Howl’s Secret Garden? The Okino village of Kiki’s delivery service? Well, that dream is about to come true. In fact, the Ghibli Park is scheduled to open its doors in 2022.

After the huge success of the Ghibli Museum in Tokyo, this time they have gone even further. It’s Goro Miyazaki, director of From Up on Poppy Hill, who is working directly on the project accompanied by his father, Hayao Miyazaki, the very famous and renowned director of Studio Ghibli who retired in 2013.

In order to coincide with the convictions of the people working on this project, a point of honor was put on the fact to not destroy any tree, and to preserve nature as much as possible. The park will cover 200 hectares and will be located in Nagakute in Aichi prefecture, a little more than 2 hours away from Tokyo by train.

When we talk about amusement parks, we tend to imagine thrill rides and a large number of attractions. However, this is not what this park has in store for us. The idea that guided its conception is to completely immerse the visitor in the universe of his favorite movies, without any rides.

For this purpose, the park will be divided into 5 parts, each with its own specificities. Three of them will open in 2022, but for the next two we will have to wait until 2023. The architectural sketches were recently revealed to the general public, much to the delight of fans. 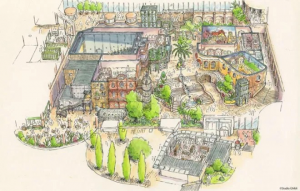 First of all, the entrance. There you will be able to find cinemas, restaurants, games for children, etc… There will also be a cafeteria probably similar in appearance to the stalls seen in Spirited Away. As far as the cinema is concerned, its small size of only 170 seats suggests that instead of showing the studio’s feature films, it is likely that they will show short films that were previously reserved for the Ghibli Museum in Tokyo.

In 2015, an exhibition on the theme of Studio Ghibli’s films was held on this same site. Of which, the only remaining element is the house of Totoro. Around this house will be built a reproduction of the scenery My Neighbor Totoro, which will allow visitors to walk in the forest that surrounds this house. 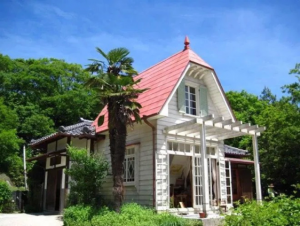 Then, there will be a part dedicated to the reproduction of Howl’s Moving Castle, with a giant elevator built in a neofuturistic inspired building. After that, a short walk will lead you to the ancient Chikura store, a human-sized replica of the store in Whisper of the Heart. 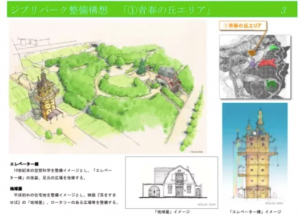 Finally, the last area will be reserved for the movie Kiki’s delivery service where you will be able to walk through the village of Okino. 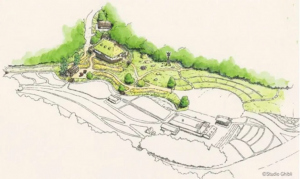 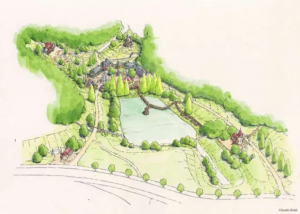 For the moment, no postponement of the opening has been announced in relation to the Covid-19 epidemic, fans can only hope that everything will happen as planned, so that they can soon rediscover their favorite movies, but this time, in real life…