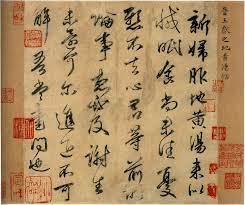 Written Japanese is composed of 3 writing systems, hiragana, katakana and kanji. Kanji are the origin of the entire writing system and are recognizable by their complexity and numerous (or not) stroke.

Here is an example:

At first sight, their similarities to Chinese character are obvious and this is totally normal since kanji originated in China over 3000 years ago. How were they invented? how did they get into Japan and how did they revolutionize the Japanese writing system?

Understanding the history of kanji and their meaning is a great and stimulant way to memorize them.

Birth of the kanji

In 1045 before J-C, Di Xin is dethroned by Wu Wang, who found the Zhou dynasty. It is during this reign that the Chinese writing system will be invented. The most credible story is that they discovered mysterious engraved tortoise shell. These were relics of ancient rituals during which the Gods were implored for good harvests, healing or other by burning shells and bones. The same people also practiced pyromancy and engraved the answers of the Gods (the cracked formed on the bones and shells) in the form of symbols on other tortoise shells.

甲骨文字 = kôkotsumoji. In Japanese it means character on oracle bones.

The idea of using symbols for writing purpose was born. Basically, kanji are the language of the gods.

Evolution of the kanjis

Of course, they were very different from actual kanji and they have undergone many changes. The first issue was that the characters were too complex and therefore it was very long to write a sentence. They get rid of everything that was not necessary for the comprehension and simplify them a lot without losing the meaning.

A kanji is characterized by the number, the order and direction of the strokes.  Chinese characters can be classified in 3 groups:

山 (yama) is the kanji for “mountain”

Some of them changed so much that it is difficult to identify what they symbolize.

we can therefore observe some recurrences in the construction of kanji. These “compressed” and recurring characters that composed characters are called keys.

More than 90% of the kanji are constructed this way!

the arrival of Kanji in Japan

Again, the story is rather vague, it is said that Korean immigrants brought them in Japan around the 4th and 5th century. This seems logical given the proximity of the countries, especially knowing that the kanjis are also the origin of the Korean writing system (that changed drastically and became the hangul, which is known for being one of the easiest in the world.). However, and strangely, some elements let us think that Japan had already knowledge of Chinese characters and that since the 1st century. Indeed, we found buckets and mirrors marked by kanji dating from this time in Japan. But, having found no text in Japanese dating from the first to the 4th century we can deduce that Japan remained illiterate between until the 4th century.

Before Japanese was entirely an oral language and all story and legends were transmitted by word of mouth. All this knowledge was therefore somewhat ephemeral and malleable according to additions and omissions of details over time. When they discovered kanji, it was finally an opportunity to put it in writing and preserve it in a more durable way.

However, it was necessary to adapt these Chinese characters to the existing Japanese language. At first, kanji were read in Chinese but then they “fix” the Japanese on it.

First, Chinese monosyllabic character was used only phonetically without paying attention to their meaning. The issue with this system is that, using a kanji for each syllabus create very long sequences.

In a second phase, a new system was developed. They decided to use the kanji for their meaning independently of their pronunciation. Since then, many rules were applied to kanji’s application to simplify their use. For example, their number have been reduced and the press for example tries to follow the official recommendation of the use of kanji to make it readable by the greatest number of people.

From kanji, Japanese people created their own alphabet: hiragana and katakana to transcribe their own languages. these alphabets were formed by “compressing” and modifying some characters.

Every kanji can be written in hiragana or katakana. It would be technically possible to read and write only with these two alphabets, but kanji are useful to quickly understand the sentence construction and reduce it.

Also, there are so many homonyms that only the use of character can differentiate.

Therefore, to be able to read Japanese, you will need to learn some kanji. The last reform on the kanji list was in 2010. The list includes 2136 kanji and it’s still evolving. In 1981, it contained only 1945 characters. Fortunately, some of them are very rarely used and some words are still written in hiragana or katakana.

This kanji means “a spindle; a counterweight; a lead wire”. it has not been included in the extended list of kanji in 2010.

To learn them or to search for those that interest you, there are useful tools:

-Kanji to Kana is the reference book for kanji. It works like a dictionary and you will be able to search for the desired kanji thanks to the different tools (keys, pronunciation…).

-Online dictionary can be a quicker and cheaper alternative. For example, on jisho.org you will find kanji signification, numbers, and order of stroke.

This learning process may seem long and complicated. This is where knowing the origin and the different stories behind the characters can help you.

As you we have already seen, kanji’s meanings are crucial for understanding a Japanese text. A great way to remember kanji is to learn the key or an anecdote. Here is an example:

皿 and 血. If you read quickly, you might not have paid attention to this little detail on top of the second kanji. Even if they look similar, little detail like this make a great difference. Indeed 皿 (さら/sara) means « plate. » and 血 (ち/ chi) means blood. Now, you are wondering what’s blood have to do with plate? The kanji 血 was in fact created from the kanji for plate. The little stroke on top symbolizes a drop of human blood that were offered to the Gods in a plate in ancient China (when it was created).  This is scary, isn’t it? But I’m sure you will remember these two.

Another way to memorize them is to picture it as something existing. For example, the kanji for woman is 女. You can think about a woman with her legs or arms crossed.

To conclude, the appearance of kanji in Japan had a huge impact on the Japanese written language as we know it today. The impetus given by this new possibility to put their knowledge on paper encouraged the Japanese to develop their own writing system. Thus, katakana and hiragana, unique to the Japanese language and derived from kanji, appeared.


Even today the similarities between Chinese and Japanese (and Korean) writing are striking. However, each country took a different direction. Korea chose to create its own alphabet, much more simplified. China enlarged the number of characters used (between 3,000 and 5,000 today) but they were largely simplified. As for japan, they chose to keep a few kanji, but they are not simplified. This attachment to traditional kanji is expressed in particular through calligraphy, this ancestral Japanese art.

Learning kanji can be long and difficult but each character has a story behind it. This is the beauty of written Japanese.