A night at the Robot Restaurant

Let’s talk about the Robot Restaurant, a tourist attraction that has gathered many of the intensely Japanese elements of Tokyo and rolled them up into a tightly packed ball that explodes nightly into rooms on a couple floors of a Shinjuku building. Talking is one thing; experiencing is another. An evening there is an assault on the senses: Eyes are dazzled by the gaudiness of the interior; ears thrum from the rock music, the taiko drums and the high pitch voices of the dancers; mouths tingle from drinking the cheap Chu-hi or Ninja lager; noses twitch from the smell of popcorn; and hands tingle from clapping in delight at all the weirdness that surrounds you. 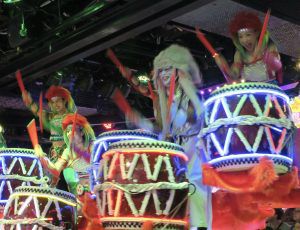 The Robot Restaurant is, essentially, a cabaret show. You can buy tickets for one of three performances daily, which gets you entrance into a ground floor lounge for pre-show drinks and into the basement for a roughly-hour long performance by pretty girls and, yes, robots. My husband and I have attended twice since moving to Tokyo a couple years ago. In August, we took in the show with friends visiting us from England.

The Robot Restaurant is in the Kabukicho area of Tokyo’s Shinjuku neighborhood, an area of the city known for its nightlife. You exit one of the world’s largest train stations and enter a district pulsing with energy.

And that’s just outside the restaurant. Wait until you get inside. Enter the lounge and it’s hard to know where to look. Everything…is…so…shiny. As if there’s not enough going on with the wall of television screens and the interior, there’s a little robot band playing classic American rock to keep your foot tapping.

You head downstairs for the theater, which is mainly a large floor with tiered seats and tables lining two lengths. The tables are for the bento boxes that qualify the Robot Restaurant as a restaurant, but we’ve never chosen to eat there.

There’s a nominal plot to what takes place in the show, but I’m not really going to try to explain that here. There’s a lot of flashing lights and moving floats and ridiculously cheery Japanese women who are clearly giving 100 per cent in their performances. It’s pure camp and it’s obvious that no one is pretending this is great art. But man, is it fun. I’d definitely recommend it for a date night.

The show takes in elements of traditional festivals– I recognized echoes of mikoshi floats and the masks of those carrying them — but mashes it up with rainbows, disco and manga. There are battles between large mythical creatures, with dainty girls riding on top and roaring with good-natured rage. (Not all are mythical. There is a giant shark that swims through at one point.) There are men in black suits laden with neon ropes performing hip hop moves in the dark. The production is professional at one level, but at another, it smacks of a college Halloween costume party, with each performer vying for the prize given out for the craziest costume.

They change up the show regularly. The last time we went, there were more robots and less creatures. This time, it ended with a Brazilian carnival theme, thanks to an upcoming Tokyo festival. Before tumbling out into the relative quiet and sanity of the street outside, we popped into the lounge one last time. So surreal. Thanks, Tokyo.

If you go: Discount tickets are available with coupons published in local magazines or through travel agencies. Or, you can book directly at the Robot Restaurant webpage.

Tales from Tokyo shares one Ohio family’s adventures as they adjust to life on the outskirts of Tokyo. Come along with the Dalzells as they explore Tokyo, figure out Japanese culture and do their best to enjoy living in a foreign land.