Checking out a Tokyo baseball game

Attending a Japanese baseball game has been on our Japan bucket list since we arrived in Tokyo almost three years ago. Finally, on May 18, we crossed that outing off our list by attending a Tokyo Yakult Swallows game. The Swallows are a professional baseball team in Japan’s Central League.  We caught them playing  the Hanshin Tigers, a team from Koshien, Japan, in their home stadium of Meiji Jinju in downtown Tokyo.

After taking our seats, we decided a beer was in order. In Japanese stadiums, that’s easy. The beer comes to you. Pretty women — nicknamed ‘Ghostbusters’ — cruise the aisles with big smiles and backpacks filled with beer which they pour from nozzles into cups for you at your seat. 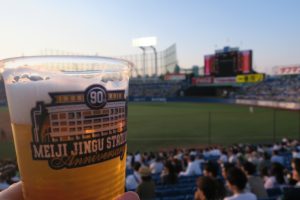 By American standards, the stadium is modest: It seats a little under 40,000 fans. Built in 1926, it wears its age well and feels rather fresh and shiny and clean for being nearly 100 years old. All seats are near the field so no one suffers from the nosebleeds so many larger stadiums offer. (Beware, though. Hubby is 6 foot and nearly kissed his knees while sitting. I’m short, so I sat comfortably.)

Our food options included snacks I wouldn’t be surprised to see at an American baseball game: KFC, pizza, french fries and popcorn. They also included rice bowls with meat, chicken on a stick, and takoyaki (octopus inside of, essentially, a hush puppy).

Swallows fans are known for their enthusiasm. One way they show their enthusiasm is by raising little mini umbrellas to cheer the team on after every score. A little weird, maybe, but I give them lots of points for enthusiasm. The umbrellas aren’t all, though. They also proudly belt out a catchy ditty called “Tokyo Ondo.” I couldn’t grasp the lyrics but was happy to yell out ‘Bonsai! Bonsai! Bonsai!” with the rest of the crowd. A brass band in the stands plays along. 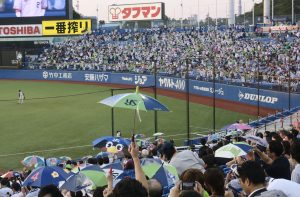 One thing I didn’t expect to find at a Japanese baseball game was cheerleaders. The dance team is called “Passion” and they bounded out to perform on the field several times during the course of the game.

The female mascot for the Swallows is named Tsubami and is the younger sister of male mascot Tsubakurou. She danced with the cheerleaders. Tsubakurou worked the crowd, but we never managed to get him to come over to us. 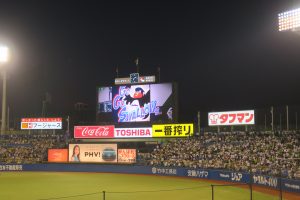 I think Liam, our 7-year-old, really enjoyed himself at the game. To be fair, we all had a great time. The true fans in the stadium — the ones who cheer for their team on screen or in person, season after season — also had themselves a great night. I’m glad. The Tokyo Yakult Swallows beat the Hanshin Tigers 4-2.

IF YOU GO: There’s still plenty of games left in the 2017 season. For details on tickets, access, etc., visit the official team page in English. Tickets are cheap: Maybe $20ish each for our tickets and only roughly $5 for Liam’s seat. You can buy them ahead from machines at convenience stores.

Tales from Tokyo shares one Ohio family’s adventures as they adjust to life on the outskirts of Tokyo. Come along with the Dalzells as they explore Tokyo, figure out Japanese culture and do their best to enjoy living in a foreign land.