Road Safety Rules in The Netherlands

A reminder of key rules for driving a car in the Netherlands, unique things to watch for on Dutch roads, how to safely drive in cities like The Hague and Rotterdam and regulations regarding transporting a child in a car… 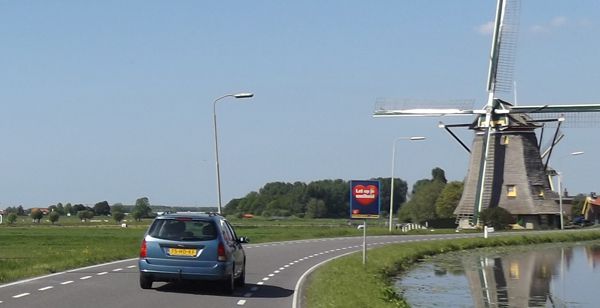 When driving in a new country, it is always advisable to check for any unique local road rules that may apply in order to travel safely. Even though traffic laws don’t differ much from country to country within the EU, international drivers too often mistakenly assume their foreign experience is sufficient enough. I have found such thinking ban lead to problems, with questions being raised, sometimes a bit too late.

Driving a Car, Moped or Scooter

The minimum age to drive a car is 18 years and 16 years for driving a scooter or moped (brommer) with a maximum speed under 45km/h. You can find more details about the regulations here. 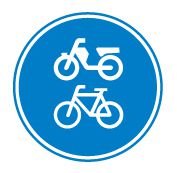 Since 1999, mopeds ride the car lanes within city limits, unless there is a blue, round sign with both a bicycle and a moped (bromfiets) on it. If both appear, it means that mopeds must ride on the bicycle path.

On these cycle paths, it is advisable to be more careful when riding with small children: keeping them on your right handside will protect them a bit more from faster vehicles approaching from behind.

Helmets are not required for motorized bicycles, but are obligatory for scooters. Scooter drivers must have passed a therôretical traffic exam after which they are issued a Class AB license. They must also have an insurance policy.

In case of an accident it is advisable to carry a red warning triangle and reflective vests in the car. In certain European countries, you are even required to have a reflective vest for each passenger in the car.

It is not permitted to use mobile phones while diving a car unless it is connected to a hands-free system, where you don’t touch the screen of the device while driving. This regulation applies to all drivers of motor-assisted vehicles (cars, motorcycles, mopeds, motorized handicap vehicles, etc.). It does not apply to a manually driven bicycle, but for obvious safety reasons, it makes sense to follow this same rule even when cycling.

Holding a mobile device in your hand while driving a car is considered an offence and subject to fine. 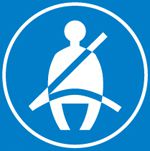 Seatbelts are compulsory for all passengers traveling in a car. Children under age 18 and shorter than 1.35 m must sit in an approved car seat or booster seat. If they are taller than 1.35 m, they are required to use the seat belt. For children who weigh less than 13 kg, a baby seat is required.

Children between 9-18 kg must sit in a car seat secured by means of the seat belt and a five-point belt that secures the child. Children between 15-36 kg need to use a booster seat. Because the two weight categories overlap, it is up to the adult/parent to decide which option provides the most safety for the child. Note that booster seats must meet certain rating requirements, for example ECE R44/03 or ECE R44/04. A sticker on the seat will show the weight range for which it was designed.

Passengers who weigh more than 36 kg but are below 1.5 m in height, should use a seat belt clip to ensure that the seat belt runs across the shoulder and not the neck (or a booster seat). (cfr. The Indispensable Guide to the Netherlands. Holland Handbook, p.142)

Although there are no regulations which prohibit children to be seated in the front seat (in a car seat or a booster seat), most European countries recommend children be transported in the back seat.

“The Netherlands has not widely adopted Extended Rear Facing car seats and most commonly-sold car seats rear-face only until between 9 – 12 months of age.” 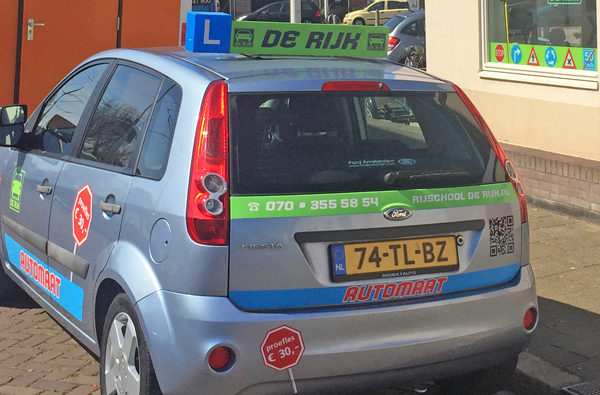 Traffic rules and signs in Holland

Unless otherwise indicated, vehicles coming from the right also have the right of way, just like in most of the other European countries!

A yellow or orange diamond indicates that you are on a road with priority  and cars coming from the right will need to wait if their street has shark’s teeth yield signs. If not, you need to give priority as this means that two priority streets are crossing.

You can download a helpful booklet in English from the government website titled: Road Traffic Signs and Regulations in the Netherlands

When turning right, always check to make sure there are no bicycles going straight ahead: they have the right of way.

Buses always have priority when re-entering a traffic lane! The same applies with trams (unless indicated otherwise) at major junctions.

Regarding the use of lights, the general rule is whenever you cannot see clearly due to darkness, you should use regular headlights. This is especially advisable whenever  you enter a tunnel. When driving in fog, snow or rain during the day, you should use fog lights front and back.

The blood alcohol level permitted by law is 0.5 promille* for all drivers, except for drivers who have been licenced less than 5 years; for them the maximum permitted level is 0,2 promille*. The same applies when driving a motorcycle or moped.

*This does not translate into a fixed number of glasses or any particular type of alcohol: it depends on weight age, sex, stomach content etc.

The very successful B.O.B. campaign, i.e. Bewust Onbeschonken Bestuurder which translates to “Consciously Non-Drunk Driver” or ‘deliberately sober driver’ encourages groups to choose a designated driver, one who will not be drinking and will do the driving.

Biking in the Netherlands is a very attractive alternative to driving and road signs are quite explicit, but there are a few essential points to be aware of  when cycling.

People rarely wear helmets while riding bicycles here in Holland because they are not obligatory. That’s not to say that helmets can’t offer protection against serious head injury. Wearing a helmet is compulsory for motorcycle and trike drivers and their passengers.

Bicycles need to be equipped with working lights: white in the front and red in the back, which should be solid (not blinking). Cycling after sunset with no lights is a fine-able offense.

Cyclists are allowed to ride two abreast, but not if it hinders traffic flow (on a road or bike path).

There is no minimum age for children to cycle on the street; it’s the responsibility of a parent or guardian to assure their safety.

Watch out for the dead angle. This short film (in Dutch) explains how to cycle safely around stopped trucks, buses, etc.

The ANWB is the Royal Dutch Touring Club, similar to the Triple A in the U.S., and provides wegenwacht,  24-hours break-down assistance, on Dutch and European roads. If you have a similar roadside assistance policy in another European member state, you can combine it with the Dutch one. Contact your provider to check the coverage.

With the ANWB membercard you also get a discount for fuel at more than 600 gas stations across the country, as well as a discount on entrance fees to amusement parks and museums, hotel and shop prizes and fees for rental cars.

DRIVING IN THE NETHERLANDS

DRIVING LICENSES IN THE NETHERLANDS

BUYING A VEHICLE IN HOLLAND