Crocuses are blooming, the days are getting longer and there only a week until clocks in the Netherlands spring forward by an hour! So what’s there to do in the area to welcome in the new season?

If you enjoy the vivid colors and fragrant scents of flowers in bloom, check out the huge variety of varietals awaiting you at Keukenhof in Lisse, South Holland.

Keukenhof showcases 32 ha of flowers, including more than 7 million tulip bulbs about to come into bloom (over 800 different types, by the way).

The theme this year is Vincent van Gogh (1853-1890), a celebration of his life in recognition of this year’s 125th anniversary of his death. A 250m2 flower mosaic of the famous painter is made up of thousand of tulips and grape hyacinths (muscari bulbs).

More than 100 flower companies put their flora on display turning Keukenhof (“kitchen garden”) into a widely anticipated annual event, 65 years after first opening to the public.

In the Orange Nassau Pavillon, flower shows will represent some of Van Goghs famous paintings. A real novelty in 2015 is the ‘Selfie Garden’, inspired by Van Gogh’s self-portraits.

Every week a different flower is showcased in the park’s Oranje Nassau Pavilion, presented in a plethora of arrangements. Here is the schedule of featured flowers by week:

In the Willem-Alexander Pavillion you can enjoy more than 75,000 tulips in over 600 varieties. The season finishes here with the largest Lily show in Europe!

This year, the Beatrix Pavilon is transformed into an impressive orchid show, an Anthurium show and a Bromelia show!

From 3-6 April, you can enjoy the Dutch Heritage Weekend, with old fashioned Dutch dancing and music performances. “At various places in the park you will find living statues of old Dutch figures, old Dutch bikes, old Dutch dance and crafts.” 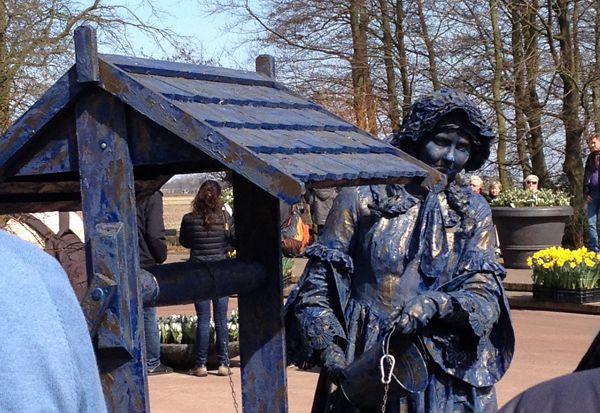 From 9-10 May, you’ll dive into the 19th century romance at Keukenhof, with classical music performances, dance and poetry recitals.

A scenic option for getting to Keukenhof is by bicycle from Leiden. Verita’s Visit is offering a round-trip guided bicycle tour through the Dutch countryside starting in Leiden and ending at Keukenhof. More details about the Keukenhof Bike Tour.

WHEN TO VISIT KEUKENHOF