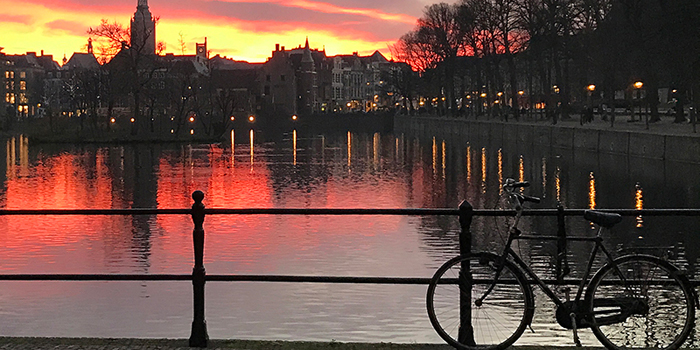 The Netherlands’ flat terrain and moderate maritime climate along with municipal infrastructure support make cycling a prime means of transportation. The country has 35,000 kms of dedicated bike paths and an estimated 22.8 million bikes in this nation of 17 million residents.

Commuting to work, school or the local market by bicycle is common in Holland. Approximately 27% of commuter trips that are less than 7.5 kms in length are made by bicycle. Dutch parking lots typically have as many bike stalls as they do car spaces.

Many employees who live a longer distance from work commute by train, but a good number of them still use a bike to get from home to the station. Some may own a folding bike and take it along with them (folding bikes are allowed on trains at no extra charge). Standard bikes (non-folding) can also be taken on Dutch trains (except during morning rush hour) but require the purchase of a bike supplement ticket (‘Dagkaart Fiets’). The current cost of this supplement is €6.10 and is valid for the entire day. It can be purchased from the yellow OV ticket machines at the train station. 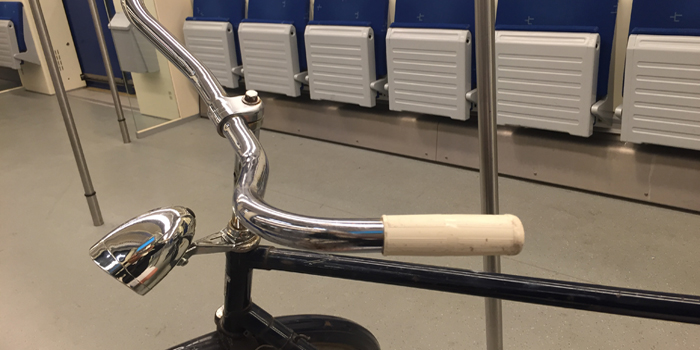 Bikes are not allowed on buses, trams or metros, with the exception of the Randstad Rail network (HTM Tram 3/4, RET Metro E) where a bike can be brought on at no charge after 19:00 weekdays and all day on the weekend. Bikes are allowed on the Waterbus and inland ferries at no extra cost.

Routes are designated with red and white directional signage. Maps attached to posts along the routes show where you are currently located and what the next destination is in either direction. Each segment of the route is numbered.

Stichting Landelijk Fietsplatform is the national cycling association in the Netherlands. It manages over 4,500km of the scenic bike paths described above which are used primarily for sightseeing and recreational purposes.
KNWU is the Royal Dutch Cycling Federation and oversees cycling sports in the Netherlands including road, BMW, track, field, beach and mountain biking, para-cycling and art-wheel riding.
Fietersbond is the Dutch cyclists’ association. It lobbies for better and safer cycling conditions in the Netherlands.
The Dutch Cycling Embassy is a cycling knowledge institute that provides data to governmental organizations, Dutch and foreign businesses and cyclists.
ANWB is the Dutch automobile association and touring club. Besides driving, it is also very much involved in cycling in the Netherlands. It operates stores throughout the country where you can purchase bike route maps, cycling clothes and bike accessories. The ANWB offers its members bicycle checks, roadside breakdown assistance, insurance and cycling holidays among other benefits.

Safe cycling in the Netherlands is of utmost importance. Certain aspects of riding a bike in Holland are mandatory by law and enforced at the municipal level by local police. Not adhering to one of these can result in a fine…

Traffic Signals: Cyclists are required to stop at red lights and only proceed once the light has turned green. Busy intersection traffic signals may have up to three green lights. At intersections with 2 green lights (one for vehicles, one for pedestrians), proceed only when the vehicle light has turned green. At intersections with 3 green lights, proceed only when the bike light turns green. The timing of multiple green lights at large intersections (2 or more lanes in each direction) are usually staggered (pedestrian followed by bicycle followed by vehicle). Only proceed when the bike light has turned green.
Turning Right on Red: Cyclists turning right are allowed to proceed when the light is red after stopping to check for oncoming bicycle, vehicle and pedestrian traffic.
Signaling a Direction Change: Cyclists are required to indicate a direction change by extending either their left or right arm directly outward.
Cycling on Sidewalks: Cyclists are not allowed to ride a bike on the sidewalk or through a pedestrian area unless it has been designated as a bike route.
Designated Bike Lanes: Cyclists are required to use a dedicated bike lane (in the road) or a bike path (separated from the road) when marked with a circular blue sign post or a painted cycle icon. A square blue sign post with the word ‘Fietspad’ indicates an optional bike path.
Cycling in Parks: Cyclists are not allowed to ride on paths in parks, forests, woods or recreation areas that are designated for pedestrians.
Cycling Abreast: Cyclists are allowed to ride next to one another when it does not hinder traffic flow. An approaching cyclist traveling at a faster speed must be able to pass on the left which will require the cyclists riding abreast to move to the right.
Bicycle Lights: A 2-wheeled bike must be equipped with a functioning lights; a single solid white light attached to the front pointing forward and a solid red light attached to the rear. A cargo bike with 2 front wheels must be equipped with 2 solid white lights affixed to the front at the same height, one left of center, one right of center and a single solid red light attached at the rear.
Transporting Children on a Bike: Children under the age of 8 years must be secured in an appropriate child seat certified for that weight class.
Cycling Under the Influence: Cyclists are not allowed to cycle if their blood alcohol content is higher than 0.5% or they are under the influence of drugs.
Mobile Phone Use while Cycling: Currently cyclists are allowed to use a mobile phone while cycling. However, the Minister of Transport has announced she will be introducing a bill in 2018 to ban texting while cycling.

Additional Notes on Cycling in Holland

Helmets: Wearing a helmet is NOT required under Dutch law. Dutch parents usually make their child wear a helmet when they are first learning how to ride a bicycle, commonly between 4-6 years of age.
Electric Bikes: Standard electric bike (i.e. max speed of 25 kph) riders must follow the same cycling rules as stated above. Pedalic electric bike (i.e. max speed of 45 kph) must follow the rules that apply to class AB vehicles (mopeds), including driver license, license plate, insurance and helmet requirements.
Bicycle Theft: Bike theft remains high in the Netherlands. For cyclists who are not able to keep their bike indoors when not being used, suggestions for lowering the chances of having a bike stolen include purchasing a secondhand bike rather than a flashy new one, use a heavy chain to lock up your bike and where possible to lock the bike to a non-movable object such as a streetlamp or bike holder anchored into the ground.
Bike Pound: Because there are so many bicycles in the Netherlands, they often become a nuisance; either because they are parked in a non-parking zone or because they have been abandoned, while still chained to a structure. Just about every municipality either operates its own removal service or contracts with an organization to go around the city and remove bikes illegally parked or seemingly abandoned. The bikes are taken to the municipal bike pound where they are logged in and stored for a set amount of time. If a bike is not claimed by the owner within that time, it is sold to either a secondhand bike retailer or to a scrap metal recycling facility.
Children and Cycling: Children in the Netherlands between ages 10-12 years are taught traffic rules and are required to pass a cycling test which is usually administered by the local police.

WHAT TO DO WHEN YOUR BIKE IS MISSING IN HOLLAND