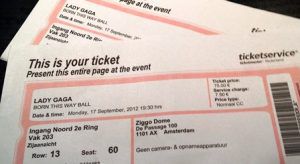 Lady Gaga’s concert last night at Amsterdam’s Ziggo Dome arena didn’t disappoint when it came to visual impact and high energy! Few performers put on a spectacle as impressive as the Born This Way Ball.

While we sometimes forget that this hugely successful performer is only now 26 years old, it isn’t hard to remember when you see her in action on the stage. She performed quite a few vigorous dance routines, and when I say that, I’m not referring to those offered by other entertainers where they step into a routine for 2 or 3 coordinated hand gestures with backup dancers and then step back out to continue singing. She was seriously involved with each routine.

The layout of the set includes a catwalk which extends out from the main stage, circling a mosh pit (Monster pit) of her most adoring fans, her Little Monsters. So in addition to the dancing that was performed on the main stage, she was continually running around this extended catwalk which went halfway down the arena floor. Now we know how she can keep her weight in check even with spending so many hours a week cooped up on airplanes!

On the topic of her always flying, she relayed how the night before this concert in Amsterdam, she had been in London to open the Fashion Week show of British hat designer Philip Treacy (see story). This followed Friday evening’s personal appearance at Macy’s Herald Square store (in New York) in support of her recently released fragrance, Lady Gaga Fame (see story). She’s one busy lady!

The quality of her voice is as good, if not better, live than it sounds on CD, quite a rarity in today’s pop scene. There was no doubt she was singing live, unlike some other celebrities (see story). This was clearly on display during acoustic performances of the songs Hair, Princess Die and You and I. Besides showing off her vocal chops, she also used this time in the show to get more intimate with the audience and relayed a personal story of feeling isolated as a teenager. While she sat on the steps of the stage, fans in the Monster pit threw gifts at her. One was a pack of cigarettes. She opened it and joked “are these those funny cigarettes?” Then smelled one, looked disappointed, and threw the pack aside. At which point a fan threw up to her a packaged joint (available here in coffee shops). She proceeded to open it, light it and took a few puffs. She said the Dutch got it right (referring to the legality of smoking marijuana in the Netherlands). She also commented on how much she loved the Netherlands and that she’s been to Amsterdam many times.

But for most of her fans, myself included, the attraction to her music relates more to her techno, dance-inspired tunes and she wasted no time in reminding us why we love her so much. Besides the tour’s title song, Born This Way, she rocked the house with hits spanning her career thus far, from the early ones (Just Dance, Love Games, Poker Face, Telephone, Paparazzi) to the more recent ones (Edge of Glory, Alejandro and Marry The Night).

The show was truly a lot of fun. And certainly Lady Gaga must be commended for the way she commanded and worked the crowd, still at the tender age of just 26!