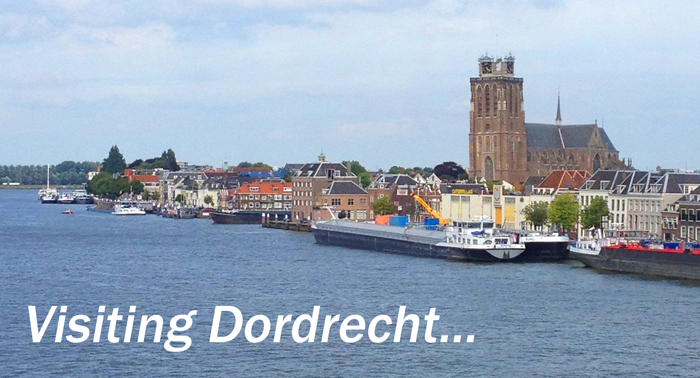 If you haven’t been to Holland’s oldest city, Dordrecht, I highly recommend checking it out. Not only does it have notable historical landmarks, but the old-town area is easy to navigate and you can reach Dordrecht fairly quickly from major cities like The Hague, Amsterdam and Rotterdam…

For those who may have looked at Dordrecht on a map and had a preconceived notion it was too far away, like myself, I can tell you it’s a fallacy.  By train, Leiden to Dordrecht is just 50 minutes while the trip from The Hague can be accomplished in less than 40 minutes. So regardless the time of day, whether it be early morning or mid-afternoon, you can still make it to Dordrecht and back in just 3 hours, will will provide ample time to see some of the highlights of Dordrecht.

If you happen to live or are visiting Rotterdam, not only can you reach Dordrecht by train in just 13 minutes, you also have an option of taking the more scenic Waterbus, which provides public transportation along the waterways between Dordrecht and Rotterdam. This trip takes one hour.

Dordrecht is officially the oldest incorporated municipality in Zuid-Holland. It was bestowed city rights by William I in 1220. It happens to be the 4th largest city in South Holland, with an estimated 2011 population of 118.8 thousand residents.

Here are some of sights in Dordrecht I highly suggest when touring the city:

– Groothoofdspoort (or ‘main entry gate’): one of the original entry ways into the city, through the perimeter wall which used to surround the island to protect it from attacks back in the Middle Ages. Seeing this landmark now, one can easily envision how grand this must have seemed to peasants and traders who came to the city. The stone figures over the walkway include the Virgin of Dordrecht, various Roman icons and the crests of the other Dutch cities which participated in the rebellion which led to the 80-Years War. You definitely don’t want to miss this landmark.

– Wolwevershaven harbor: just one of the many docks in Dordrecht, but this one is for larger boats and small ships. Lots of classic, restored vessels here, providing a great image of Dordrecht’s maritime history and culture. Crossing over the Wolwevershaven inlet is the classic Damiatenbrug.

– Johan & Cornelius de Witt statue: Bronze statue (by Toon Dupuis in 1918) of the brothers who were key figures in Dutch history. Located at the end of Visstraat as you cross the Visbrug.

– Dordrecht Stadhuis (“town hall” in Dutch): a beautifully maintained building originally built in 1383, with part of it on land and part over a canal. One of the oldest town halls in the Netherlands.

So put Dordrecht of you list of places to visit in South Holland. It’s a city full of history, is extremely accessible on foot or bike, and is a lot closer than you might think.