In 2017, Johan Rudolph Thorbecke, a 19th-century Dutch political leader, was honored with a marble and chrome monument in The Hague. It is located on the Lange Voorhout, not far from the Binnenhof where he spend much of his adult life… 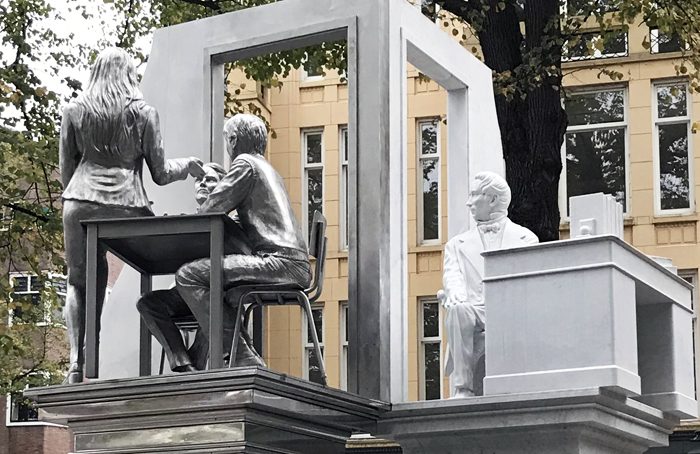 J.R. Thorbecke was born in Zwolle in 1798. During his youth, the Dutch Republic was in a state of constant flux, due primarily to France. In 1806, Napoleon Bonaparte established the ‘Kingdom of Holland‘ and made his brother, Louis Bonaparte king. This was the first time that the geographic area which today closely resembles the Netherlands, was ever recognized as an independent land.

Four years later, Napoleon had a change of heart. He felt his brother was not governing to his liking, and that he was often making decisions which were not always in the best interest of France. So in 1810 Napoleon forced his brother to abdicate the throne, he then dissolved the Kingdom of Holland entirely and annexed the territory of Holland as part of France. Thorbecke would have been a teenager around this time.

In 1813, Napoleon’s army was defeated at the Battle of Leipzig. In the outcome, the son of Willem V, the last stadholder of Holland, was called back from exile in England and claimed his hereditary right as Prince of Oranje. Two years later, he proclaimed himself King of the Kingdom of the Netherlands. By this time Thorbecke would have been almost seventeen years old.

Johan Rudolph Thorbecke received a doctorate from the University of Leiden in 1820 and traveled Europe for the next several years, where he learned more about history, philosophy, governance and citizenship. He taught modern history and diplomacy at both Ghent and Leiden universities.

Thorbecke, who originally supported the establishment of the Dutch monarchy, began to change his opinion over the years. In the 1830’s he wrote several opinion papers on governance which became more anti-autocratic in stance. His first foray into politics came a few years later when he was elected to the South Holland House of Representatives in 1844. By this time, King Willem had been ruling for nearly 30 years.

J.R. Thorbecke was a strong force and quickly developed into the leader of the opposition. He joined with several other representatives to come up with suggested changes to the Dutch constitution, but it was Thorbecke’s ideas which proliferated the revisions. The proposed changes would greatly reduce the power of the monarch and put it into the hands of parliament. By 1848 they were able to pressure King Willem into setting up a committee to evaluate the proposed changes and Thorbecke was appointed head of the committee. The new version of the constitution was approved by the States General in November of 1848.

Among the changes was the direct election of members of the House of Representatives by Dutch citizens. King Willem appointed Thorbecke as formateur of the first Council of Ministers, effectively making him the first Prime Minister of the Netherlands in 1849.

King Willem’s hands were mostly tied in agreeing to all these actions due to a poor economy, the Belgian Revolution and general unrest. This led him to abdicate the throne the following year and his eldest son, Willem II, became King of the Netherlands. He inherited a position that had greatly reduced power from the monarchy set up by his father in 1815.

The Johan Rudolph Thorbecke monument in The Hague was designed by Thom Puckey in collaboration with Stroom Den Haag. It was unveiled in February 2017 and is a combination of marble and stainless steel. The statue conveys how Thorbecke’s ideas in the 19th century have influenced modern day Dutch society and governance. 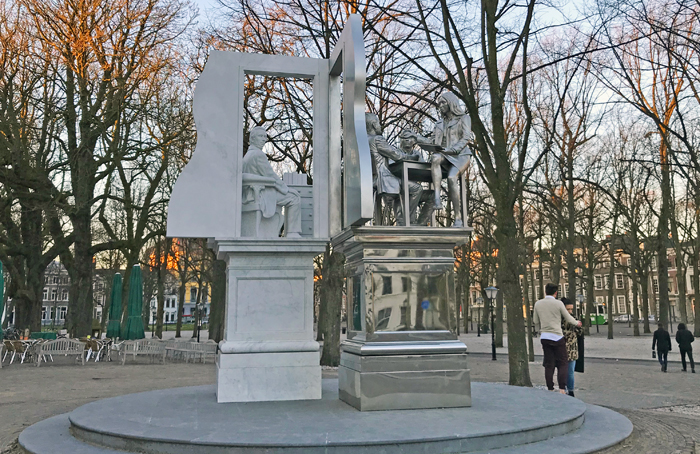 KING WILLEM I MONUMENT IN THE HAGUE

VOTING IN THE NETHERLANDS