Johan de Witt was an important figure in Dutch history, governing over Holland for nearly 2 decades during the Dutch Golden Age. He has been honored with monuments in Dordrecht (where he was raised) and The Hague (where he was killed)… 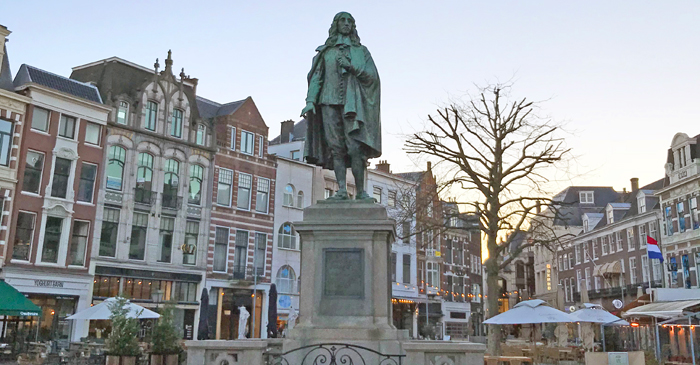 Johan de Witt was born in 1625 in Dordrecht during the Dutch Golden Age. He was well educated, having attended Latin school as a youth, studying mathematics and law at the University of Leiden and receiving a doctorate from the University of Angers. By age 25, he was appointed pensionary (mayor) of Dordrecht.

In 1653, De Witt was elected councillor pensionary for the States of Holland, the most powerful province at the time, which made his the primary voice for the Dutch Republic. He strongly supported the economic interests of the region including the shipping and trade industries. He was less strong-willed when it came to religion, generally supporting religious tolerance.

Johan de Witt was also a strong supporter of ‘republicanism’ rather than monarch rule. He was a key negotiator for ending the First Anglo-Dutch War in 1654 with the Treaty of Westminster. Part of the treaty included a secret provision to never appoint Willem III, the Prince of Oranje as Stadholder over the Dutch provinces. Willem III had been born days after the death of his father Prince Willem II, who himself was the son of deposed English king Charles I. Willem III was King Charles’s grandson.

The Dutch Republic flourished following the end of the war under De Witt’s leadership. The Dutch navy became even more powerful under the direction of De Witt’s peer Lieutenant-Admiral Michiel de Ruyter.

The Second Anglo-Dutch War began in 1665 and ended two years later, in 1667, with the signing of the Treaty of Breda. As Grand Pensioner of the Dutch Republic, Johan De Witt again played a major role, not just in negotiating the treaty but in planning key military attacks on the English. Even with the successful end of the Second Anglo-Dutch War, a divide existed between those citizens who supported state governance and those who wanted a stronger royal leader (‘Orangists‘).

In 1672, the French and British both attacked the Dutch Republic during what is known as the Franco-Dutch War. In June of that year, Johan de Witt was stabbed and seriously wounded by an attacker. Six weeks later he resigned his leadership position, having governed for nearly 20 years.

Shortly after his resignation, in what was likely a planned attack orchestrated by Willem III and his supporters, Johan de Witt and his brother Cornelis de Witt were shot and killed near the Gevangenpoort in The Hague. A mob of Orangists took their bodies, strung them up in the nearby gallows and mutilated them, feasting on various body parts.

The Johan de Witt monument located on de Plaats, next to the Gevangenpoort Museum, was created by Fredrik Engels Jeltsema and unveiled by Queen Wilhelmina one hundred years ago, on 12th June 1918.

The bronze and stone Johan and Cornelis de Witt monument in Dordrecht (below) was also created in 1918, by Toon Dupuis and Dirk Roosenburg. It is located at the Visbrug. 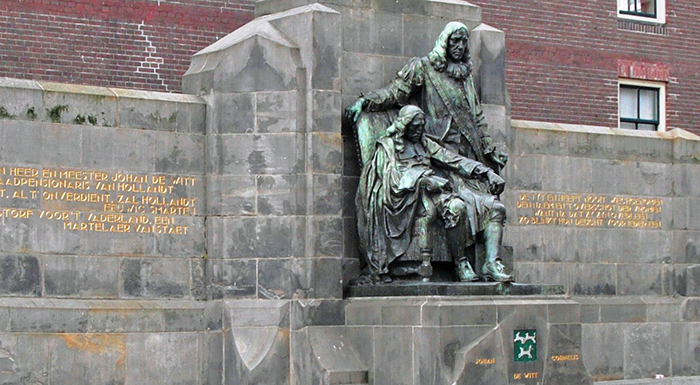 A third statue of Johan de Witt, this one made of stone, is located on the Schiekade in Rotterdam and was designed by the Dutch sculptor Albert Termote. It was unveiled in 1949.